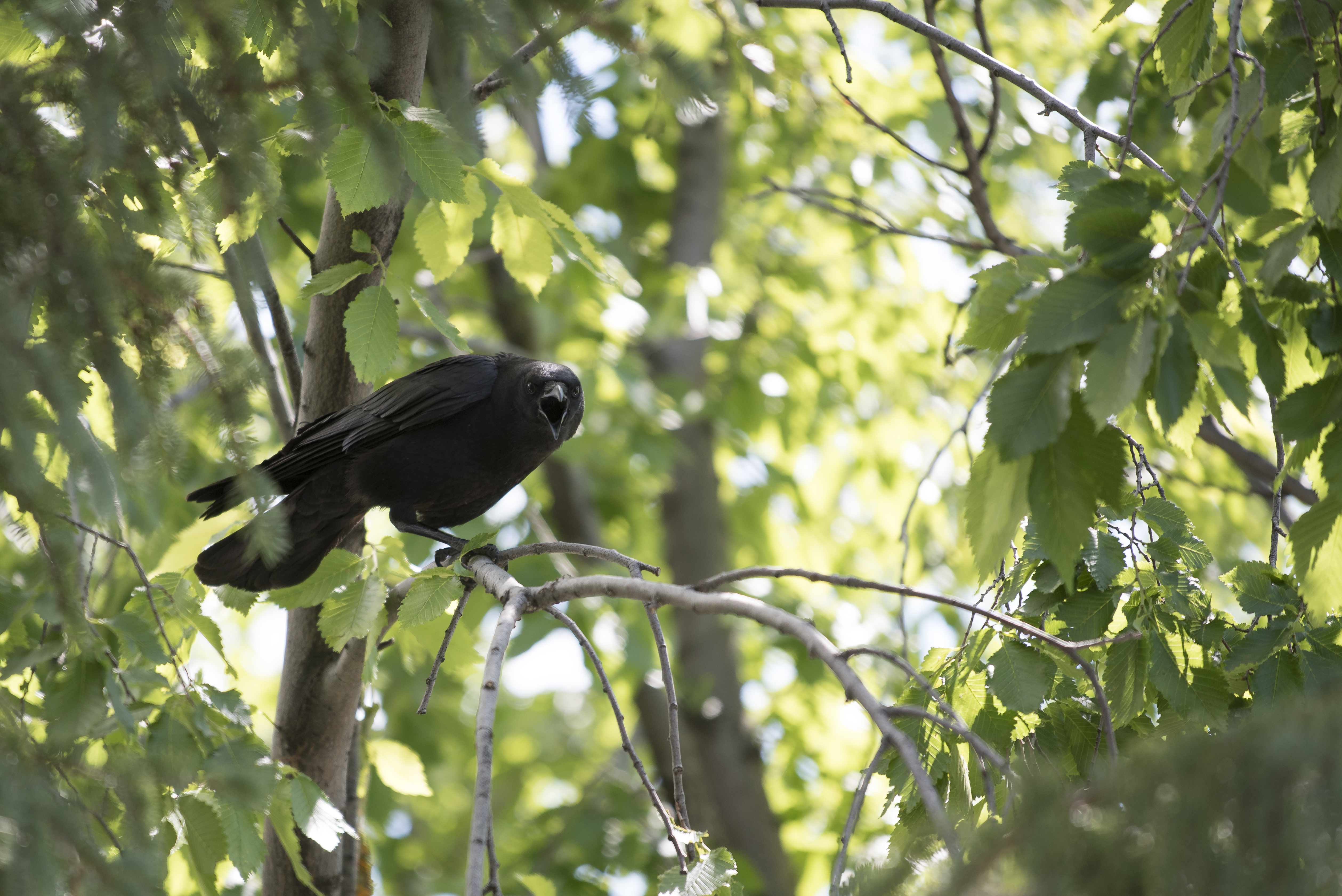 As Halloween approaches, it’s a perfect time to talk about one of our favorite creatures that is typically associated with all thing spooky – the crow! Crows are a part of the corvid family and are a very intelligent bird. They don’t have the best reputation, and are often thought of as a nuisance – perhaps a little too often. I’m hoping that after reading this blog we will have enlightened some of you who may be on the not-so-fond side of the crow. 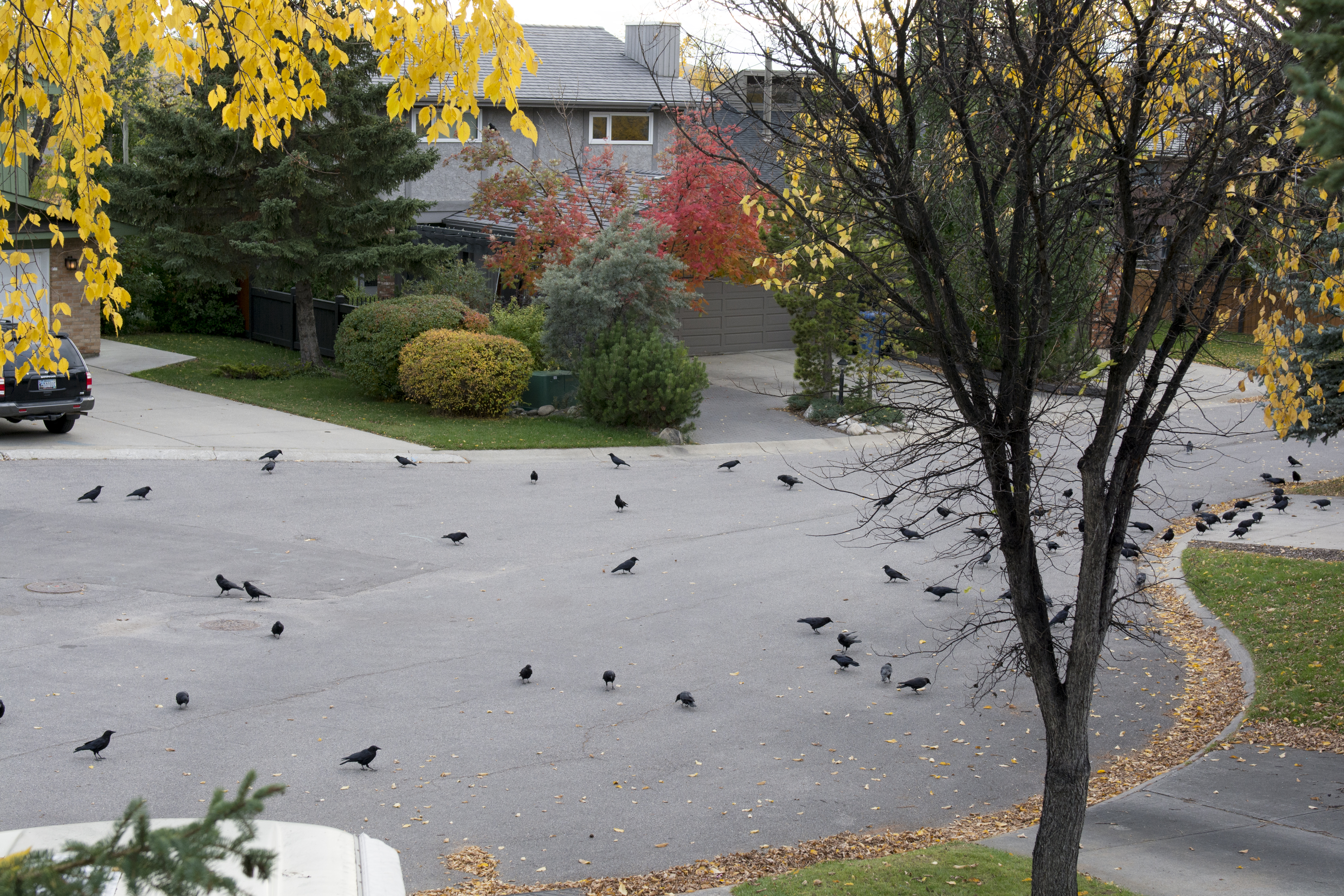 Crows can be found globally, and the species here in Alberta is the American crow (Corvus brachyrhynchos). These birds are opportunists and will eat almost anything they find in the wild (or in their urban jungle) including insects, worms, carrion (carcasses), seeds, nuts, grains, and eggs or chicks of other bird species’ (Cornell University 2015).

Crows prefer to nest in the top third of an evergreen tree. Both parents of a pair (and sometimes their young from a previous year) will build their nest out of sticks and branches, pine needles, weeds, bark and even animal hair (Cornell University 2015).

Crows are extremely social birds and are rarely seen alone. Crow families consist of parents and their offspring from the past two years, the offspring will help raise new young before starting their own families (Cornell University 2015).

If you live in the northwest of Calgary, you might have seen a large group (100+) of crows that gathers in the fall and winter. This could be due to the interesting fact that crows will often congregate in large numbers (sometimes up to TWO MILLION!) in winter to sleep in communal roosts (Cornell University 2015). Some of these roosts have been established for 100 years or more, and will stay in an area even after it has become urbanized (Cornell University 2015).

Now is the time of year that crow fledglings (and other types of birds) start leaving their nests! AIWC is here to inform you that the crow hopping around on the ground may just be newly out of his or her nest! Crow fledglings are very large and look like they could be adults. Don’t be immediately alarmed if you spot one if these birds as just described, but take a minute or two and observe the bird’s behavior. If the behavior seems abnormal at all (lethargic, injured, or other), PLEASE don’t hesitate to call us (403-946-2361) to help! Always remember, it is unlawful to keep any wildlife without a proper license and training to do so. 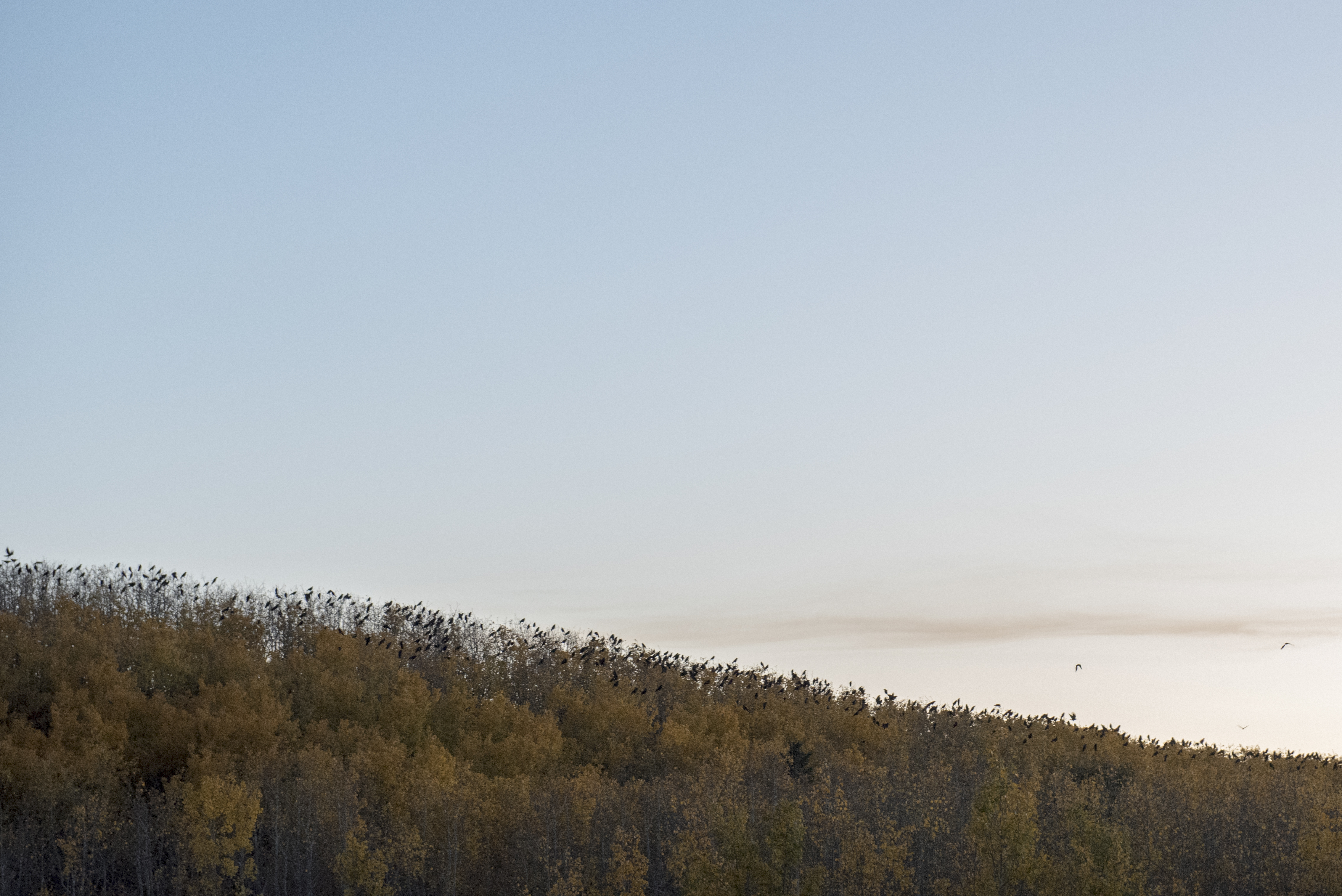 –          The American crow is closely related to the black-billed magpie (Pica hudsonia) and both species are in the same family (Corvidae).

–          Both crows and magpies are known to create and use tools (e.g., putting water on dry food, dropping pine cones on predators near their nests) (Cornell University 2015). Tool usage in the animal kingdom is a sign of intelligence, and not all animals have the ability to use tools.

–          Mobbing is a behavior that crows demonstrate where groups of crows will work together to chase away a predator. Some owls are predators of crows and will eat their eggs or young if they have the chance, and as a result, crows can often be seen mobbing an owl.

–          Crows can learn how to speak (another sign of intelligence)! Peg Leg, a crow and wildlife ambassador of the Helen Schuler Nature Centre in Lethbridge lived to be 23 years old (Ho 2015) and often greeted visitors with a friendly ‘hello’!