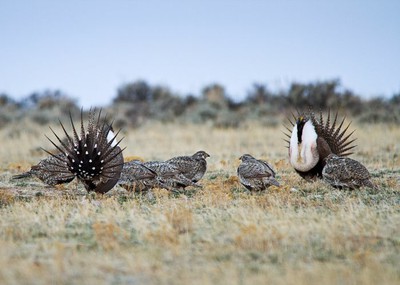 As one of the largest grouse species and with males sporting a spiked fanning tail, the greater sage grouse is especially striking. During mating season these birds return to their ancestral “lek” where males perform elaborate dances in which their broad white chests are further accentuated by inflated yellow air sacs. Their odd calls and the timing of their displays at dawn as the sun rises over the expansive prairie sky makes this chicken-like bird all the more impressive.

Should you find an injured or orphaned greater sage grouse, or any other wildlife, contact AIWC for assistance. If you would like to support AIWC’s work consider adopting an animal, volunteering at the centre, or donating to one of our fundraisers.