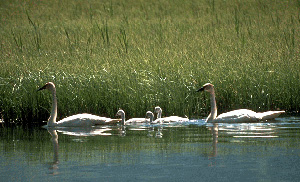 You may have noticed big white birds in lakes and ponds recently who aren’t normally there. These birds are trumpeter swans.

Trumpeter swans breed in the summer time and spend their summers in northern Alberta, northern British Columbia, Yukon and Northwest Territories among other smaller summer populations. It is believed that most breeding pairs of trumpeter swans breed for life. Both parents work together for two to four weeks to build a nest that can reach up to 3.4 meters in width and 2.7 meters in height!

Trumpeter swans will have one brood per season with four to six offspring. Offspring only stay in their nests for one day and are able to swim and eat upon leaving.  They can fly in 90 to 122 days.

When the season begins to change and weather becomes cooler, these swans begin to migrate to their winter range which is located on the northern Pacific coast. While migrating, they stop at bodies of water along the way to take breaks and eat, which is why we have been able to see them more frequently near the Calgary area recently.

Here are some more interesting facts you might not have known about trumpeter swans:

The Cornell Lab of Ornithology. All About Birds. Trumpeter swan. Available at: www.allaboutbirds.org/guide/Trumpeter_Swan/lifehistory