Lessons in Wildlife from a Rough-Legged Hawk 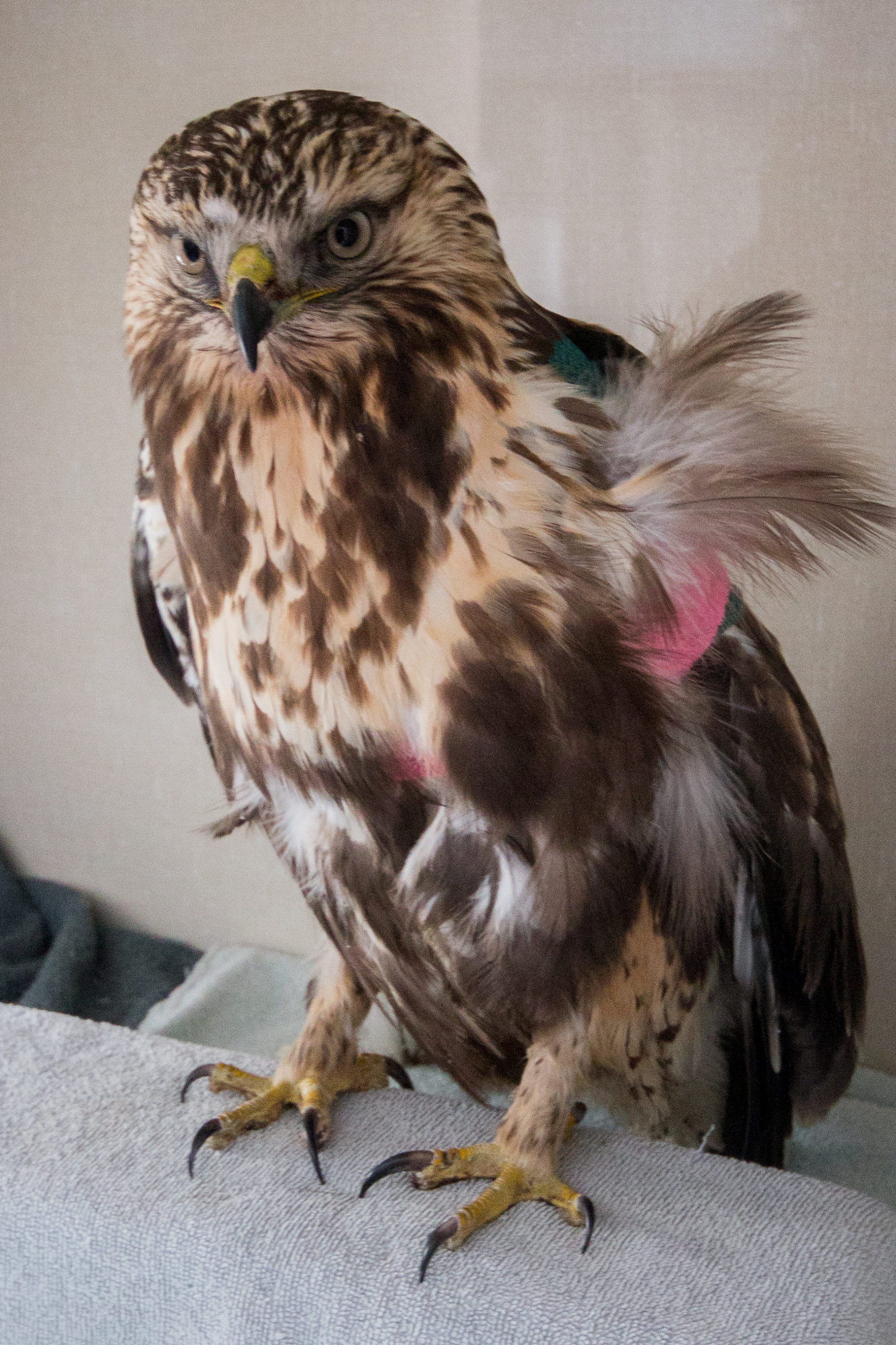 Rough-legged hawks (Buteo lagopus), or, affectionately, roughies, are a common raptor species in Alberta. They migrate each winter from their nesting grounds in the Arctic, passing through Alberta on their journey south to the United States. If the winter here is mild, a few may spend the whole season in Alberta.

The prairies and large, treeless areas are favourite hunting grounds of roughies. Here, they hunt small mammals like hares, mice, and ground squirrels. One characteristic that makes rough-legged hawks easily identifiable is how they hunt: they hover over their prey in one spot from above, rather than circling. Just like other raptors, this species is protected under the provincial Wildlife Act as non-game, meaning no one is allowed to hunt them.

This rough-legged hawk came to us this winter after a responsible member of the public found him in distress and brought him to a Calgary veterinary clinic, who cared for him until one of our volunteer rescue drivers was able to pick him up. He had visible problems using his left wing.

Upon examination, he was diagnosed with a broken clavicle, possible the result of blunt trauma, such as a vehicle collision. Further examination and x-rays revealed he also had pellets embedded inside him, evidence of having been (illegally) shot likely some months prior. It is entirely possible his previous injuries from being shot resulted in reduced mobility for this hawk, and increased likelihood of future harm.

The main concern for his recovery was the proper healing of his clavicle. As with people, if a broken bone is not aligned, it will have limited mobility after it is healed, and for a hawk dependent upon his ability to fly for every aspect of his survival, a broken bone can leave him unable to return to the wild.

Over the course of his care, the roughie’s health deteriorated and it was increasingly unlikely his injuries would heal enough for him to be able to fly, hunt, and migrate. The decision to humanely euthanize him became the only option; he would not be able to be returned to the wild as a self-sufficient bird. Unfortunately, this is a stark reality of wildlife rehabilitation: even the best care cannot heal some of our patients enough that they can be returned to the wild where they belong.

Remember: if you find a hawk or any other wild animal in need of help, we are open every day. Call our Wildlife Hotline at 403-946-2361 right away for help and advice.

Additionally, if you witness any acts of cruelty against wildlife, be sure to report it to the authorities right away – even the smallest squirrel and noisiest magpie each deserve our compassion and play an important role in our natural ecosystems.

Our work with National Wildlife Centre

There are exactly 21 days left until the first day of spring (but who’s counting) and while you wait for warmer weather, here’s a list of a few parks in

A Tour of AIWC’s Enclosures

One of the most critical components to a successful rehabilitation and release of a wild animal in AWIC’s care is the enclosures we keep them in.  When a patient is