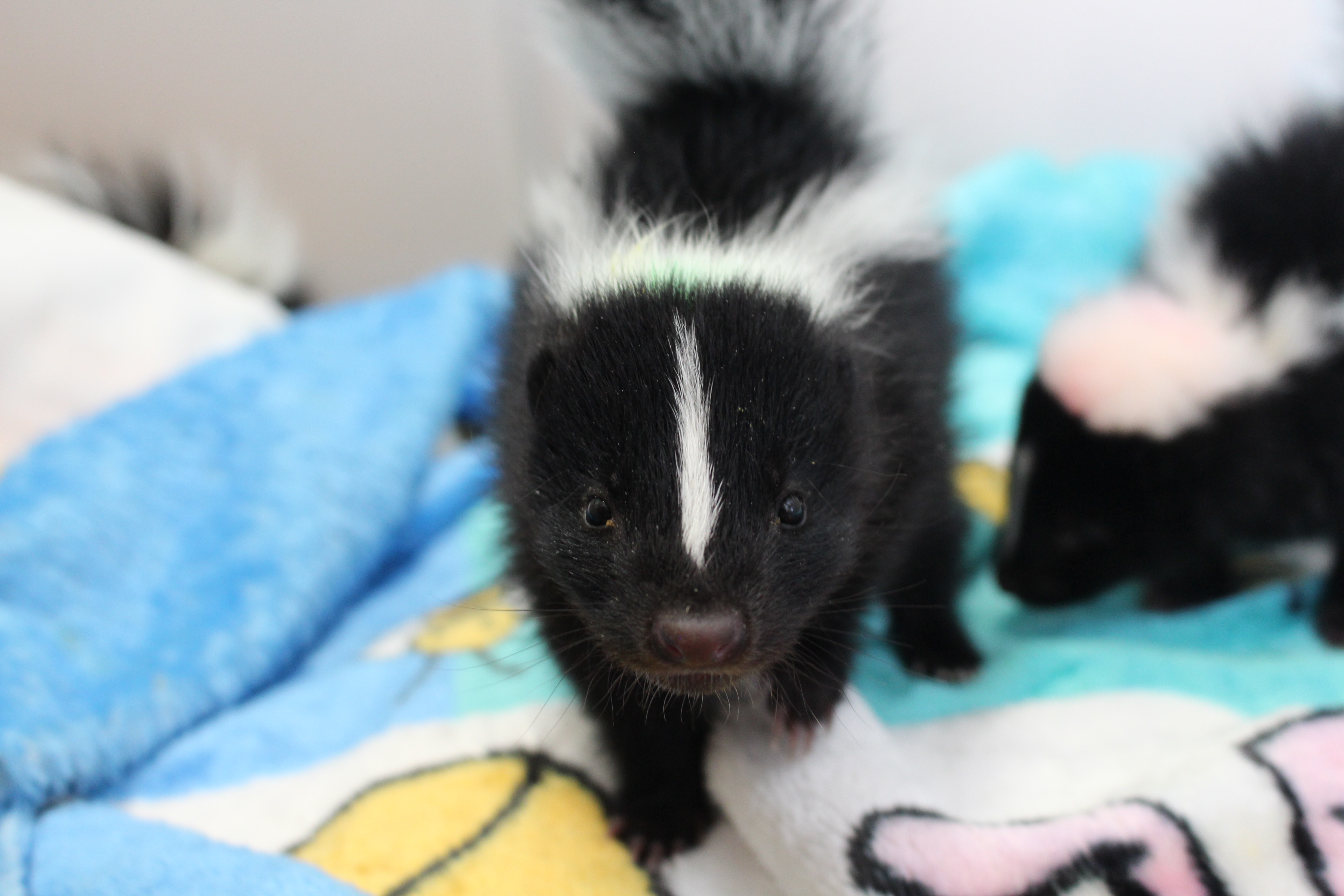 Our Smelly Neighbour – The Striped Skunk

Of the four skunk species that live in North America, the striped skunk Mephitis mephitis is the most common and is the only one of the four that lives in Alberta.   Striped skunks can be found across the province but they are most commonly found in settled central and southern areas. They inhabit farmlands, grasslands and forests, and can also be found in towns and cities.

The striped skunk is about the size of a house cat, with adults weighing between 2 and 4 kilograms and measuring about 74 cm in length. They have a distinctive look, with their thick glossy black coat and white markings that start as a narrow stripe down the centre of the face extending into a wider stripe at the back of the head, separating at the shoulders and continuing as a white stripe along each side of the back to the base of their tail. Their tail is mostly black but stripes may extend down it.

The striped skunk is a member of the weasel family Mustelidae, who all have well developed scent glands; however, the striped skunk has taken this to the next level! In fact, the scientific name mephitis is Latin for ‘bad odour’. The striped skunk’s scent glands hold approximately 15 cc’s of an oily yellowish liquid which is a sulphur compound n-butyl mercaptan. The skunk can spray this fluid 4 – 5 metres and up to 6 times in a row.  The odour is strong enough to carry almost 1 km on the wind.

Skunks are not aggressive, but they may spray if they feel threatened. A skunk may show its intentions by growling, hissing, stamping its front feet and raising its tail. To avoid getting “skunked”, back away slowly and quietly, and avoid making any sudden movements.

Striped skunks are omnivores. Their diet consists of insects, including grasshoppers and crickets. They also eat insect larvae such as white grubs and army and cut worms which they dig for with their sharp front claws. Skunks also eat mice, shrews, ground squirrels, young rabbits, birds’ eggs and various plants. In the fall and winter, a skunk’s diet consists mainly of almost equal amounts of plant and animal food.  Approximately 70% of the skunk’s diet is beneficial to humans, with only 5% being harmful to human property. Skunks have been known to visit bee hives and hen houses.

The striped skunk does not hibernate, but is not active during the coldest of winter months. Although it is not normally a social creature, it will share its den with other skunks in order to keep warm. The striped skunk gathers leaves for its den by stuffing them beneath its body and shuffling along with the leaves between its legs.

As spring is definitely in the air, no doubt the striped skunk will be making its appearance across the province!

2 responses to “Our Smelly Neighbour – The Striped Skunk”