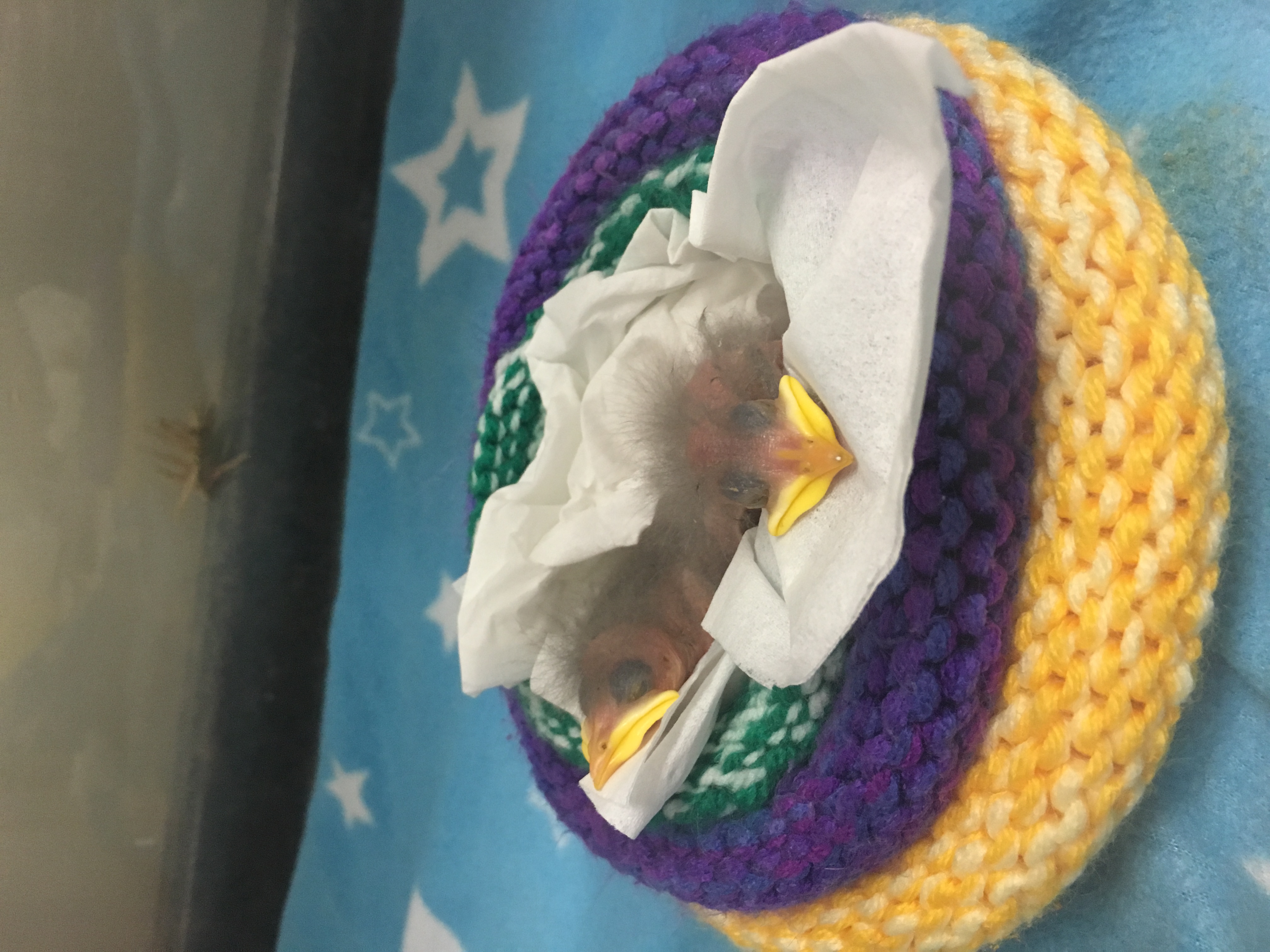 AIWC Caring for an Influx of Early Birds

Baby birds require almost constant care, and the number of birds admitted to AIWC has doubled since this time last year! As a result, staff and volunteers are busier than ever, putting in extra hours to take care for the centre’s avian patients.

Volunteers recently got a lesson in caring for orphaned and injured birds when a workshop was held at AIWC. At the workshop, they learned about caring for baby birds, from species identification to mixing specialized formula to feed them – baby birds start out needing to be fed every 15 minutes!

Since the birds are not able to take care of themselves, volunteers also learned to build them artificial nests. Branches and towels are used for larger birds like raptors, while smaller birds can be housed in cozy nests of yarn knitted by AIWC supporters.

The warm winter and early spring has resulted in an increase in all types of wildlife arriving at the centre, and at earlier arrival times. The first bird fledglings arrived almost a month early in 2016 at the end of April. This year, the first great horned owl nestling was admitted on March 16th , while in 2014, the first great horned owl baby wasn’t admitted until April 20th. (To read more: https://www.aiwc.ca/increased-number-of-animals-being-admitted-to-aiwc/ )

Volunteer rescue drivers have also been working around the clock rescuing waterfowl such as Canadian geese, often found stranded at the top of high-rise buildings.

The warmer temperatures mean that birds who have migrated back to the province are able to mate and nest earlier than normal. More birds also chose to over-winter here this year instead of migrating. In addition, more food resources in the environment mean parents are able feed and care for larger numbers of young.

With more people outside enjoying the warm weather, however, it’s important to remember that most of the wildlife into the centre is not, in fact, orphaned. Often would-be rescuers separate animals from their mothers, who may just be off gathering food. That’s why if you see a baby bird on its own but otherwise safe and healthy, you should leave it where it is and call AIWC (403-946-2361) before intervening.

The influx of new patients means greater costs at the centre. Raptors, a family of birds that includes owls and hawks, can cost up to $10 per day per baby just to feed. You can support the work of the centre by making a donation, and additional volunteers are always appreciated.

The earlier admissions and numbers of patients seen by AIWC is consistent with long-term data from around Canada, showing earlier arrival dates for migrating birds correlating with warming trends in the earths climate. “A study of 63 years of data for 96 species of bird migrants in Canada showed that 27 species have altered their arrival dates significantly, with most arriving earlier, in conjunction with warming spring temperatures,” says Nature Canada. In addition, “one large-scale study showed that birds are laying eggs at an average rate of 6.6 days earlier per decade.”