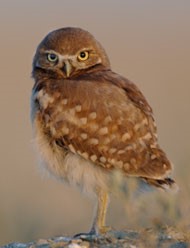 What are Burrowing Owls?

Burrowing owls (Athene cunicularia) are a small species of owl distributed across select regions of North and South America (Alberta Burrowing Owl Recovery Plan 2012-2017). Approximately 9 inches long, they are differentiated from more typical owl species in that they are most active during the day, and get their name from the burrows that they nest in.

Burrowing owls do not make these burrows themselves, but instead rely on prairie animals such as prairie dogs to create the burrows, which the owls will use once they have been abandoned by their previous occupants (Recovery Plan 2012-2017).

Burrowing owls have also developed longer legs than other owl species, and these are useful in sprinting to catch prey, primarily large insects and small rodents (AEP profile).

The burrowing owl in Alberta has been classified as “at risk” by the current General Status of Alberta Wild Species report.

Where are Burrowing Owls found?

While the majority of the range of the burrowing owl in North America is based in the United States, around 4% of the wild population is found in Western Canada, as the subspecies Athene cunicularia hypugaea (Recovery Plan 2012-2017), and is listed as “endangered” at the National level.

Generally, Canadian burrowing owls are found in southern Alberta and Saskatchewan, where its breeding range has been steadily shrinking. They can also be found in limited populations in Manitoba and British Columbia, where the terrain is appropriate.

Because burrowing owls are migratory, the Alberta population generally spends the winter season in the southern United States and Mexico. This is important in terms of conserving the Alberta population, as changes in mortality factors and habitat outside of Alberta can contribute to a decline in numbers (Environment Canada 2010).

What is being done to protect the Burrowing Owl?

In Alberta, burrowing owl populations have shown a steep decline due to changes in habitat, wintering factors outside of Alberta, and human disturbance (Recovery Plan 2012-2017).

In 2006, the burrowing owl in Alberta was designated as “endangered”, up from the previous “threatened” status, based on the reduced distribution in the province, along with a small overall population size across both Canada and the United States (Recovery Plan 2012-2017). This designation makes it illegal to harvest or traffic the burrowing owl, or to disturb the nesting sites or burrows, under the Alberta Wildlife Act.

The long-term goal of the Alberta Burrowing Owl Recovery Plan for 2012 to 2017 is to “increase the population of Burrowing Owl in Alberta to viable, naturally self-sustaining levels, well-distributed along its range”. To achieve this, the plan has three short-term goals: To increase the burrowing owl population in Alberta to 400-600 pairs by 2017; to stabilize distribution of the current range of burrowing owl, eventually restoring them to natural levels, and to maintain, increase and enhance habitats for burrowing owls in Alberta (Recovery Plan 2012-2017).

Economic expansion and the transformation of natural prairie land in Alberta is likely the biggest factor in the reduction of the burrowing owl population. In addition, it has been found that pesticides (used for invertebrates and small mammals) are indirectly affecting burrowing owl populations that feed on these small animals (Recovery Plan 2012-2017).

As always, public knowledge and landowner stewardship play an important role in the conservation of the species that reside in Alberta, while stabilization of agricultural grazing resources land stewardship may provide further habitat restoration and recreational use for the general public as well.

If you want to get involved in the burrowing owl conservation efforts, spreading knowledge (such as by newspaper articles and blog posts) is a good way to start. Getting in touch with city councils to attend planning agendas and the Burrowing Owl Conservation Network are also ways to help. Activities such as Canada’s Christmas Bird Count (https://www.birdscanada.org/volunteer/cbc/) relies on volunteer input to collect wildlife surveys, and are always looking for more people to help.