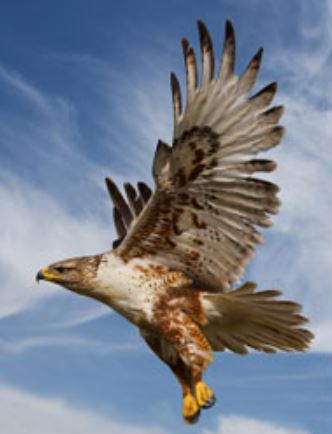 What are ferruginous hawks?

The largest of the North American hawks, ferruginous hawks (Buteo regalis) are named specifically for their rust-coloured plumage on their backs and heads. Due to their size and behaviour, they may often be mistaken for eagles. Ferruginous hawks feed primarily on medium-size mammals such as rabbits and squirrels, but they will also feed on smaller birds and reptiles. These hawks are endemic to North America, and they are usually only active in the summer months, during which they nest and raise the young, and then begin to migrate south towards the end of the season (AEP Profile)

Where are ferruginous hawks found?

The ferruginous hawk is found only in the Great Plains of North America, and the grasslands of southern Alberta, where they arrive during late March to early April and begin their southerly migration to Mexico in mid-October (Bechard & Schmutz 1995). The hawk-preferred habitats are uncultivated grassland and prairie, where they can utilise thermal updrafts, and quickly chase prey with no cover. Specifically, in Alberta their historic density and breeding success is linked with the distribution of Richardson’s ground squirrel, which is their main prey (Downey et al 2005).

What is being done to protect the ferruginous hawk?

The ferruginous hawk is currently classified “at-risk” by the General Status of Alberta Wild Species Report, and “endangered” under the Wildlife Act (AEP profile). It is estimated that fewer than 700 pairs remain in the province, as their numbers are declining because of loss of nesting habitat. As a threatened species, they are protected under the provincial wildlife act, and it is illegal to kill or harass individuals or disturb their nests (AEP profile).

The Alberta Ferruginous Hawk Recovery Plan (2009-2014) was established with the goal of achieving a viable, self-sustaining population across the Alberta grassland habitat, and for this population to be a continuous one that ranges across Alberta, Saskatchewan, and Montana.

Because of the increase in industrial and agrarian development in Alberta, the recovery plan states that the present reduced range is unlikely to be increased, and so efforts are best spent on maintaining current populations and recovery, while looking for opportunities to establish grassland restoration when possible.

One of the biggest factors in the reduced population size of the ferruginous hawk is a lack of nesting sites. The Provincial Ferruginous Hawk Lead has released education material for landowners who wish to contribute to the recovery of the hawks, and suggests the creation of artificial nesting posts that can be used to supplement existing recovery efforts (Nature Canada, Downey et al 2006).

As always, increasing knowledge and education of Alberta’s animal species is also one the biggest ways we can help. Public outreach and education programs have shown that people care deeply about protecting everything that makes Alberta special, so let’s do everything we can to spread the word and help recovery efforts.