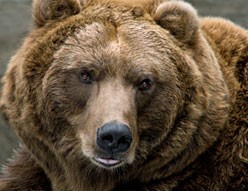 What are grizzly bears?

The grizzly bear (Ursus arctos horribilis) is a subspecies of brown bear found across North America. Varying in colour from blonde to almost black, Grizzly Bears usually have light brown fur accentuated by white-tipped or blondish fur on the back and rear, giving it the “grizzled” appearance they are partly named for (Wright 1909). Males of the species weigh between 130-180 kg depending on region and habitat, while females are usually around two thirds the weight of the male (AEP profile).

Grizzly bears are characterised by broad, “dished” faces and long snouts; rounded ears; and long white streaked claws whose prints show a “five to eight-centimeter gap ahead of the toe prints” (AEP profile).

Where are grizzly gears found?

Brown bears in general have the largest distribution of bear species worldwide, found in Asia, Europe and North America (Storer & Tevis 1996). The grizzly subspecies in particular was found from Alaska to Mexico but has dwindled in distribution in recent years. In Alberta, their current range includes areas in or near the Rocky Mountains, and in boreal areas of central and north-western Alberta (AEP profile).

Grizzly bears generally require large areas of land, due to a combination of social and ecological requirements, and tend to stick to the prairie and parkland (AEP profile).

In order to have full access to their primary food sources, grizzly bears require a wide range of seasonal habitats, from dry subalpine grasslands in spring to wet areas such as gullies, meadows and fens in summer. Grizzly gears hibernate through the winter, using dens dug into areas supported by large amounts of tree roots and shrubs, along with accumulated snow to provide insulation (AEP profile).

What is being done to protect the grizzly bear?

Grizzly bears are designated as “threatened” under Alberta’s Wildlife Act, due to its small breeding population size, and expected decline due to human activities (AEP profile).

The new Alberta Grizzly Bear Recovery Plan was drafted in 2016 and includes steps to aid the recovery of the existing populations such as strategies for “restoring habitat connectivity across highway corridors” (AGBRP 2007).

Wildlife corridors are stretches of natural habitat that connected two or more previously unconnected areas (after human development has separated the natural area) that allow for population distribution and gene flow (Bond, M. 2003).

The AGBRP (2016) also outlines a continuation and refinement of strategies to “reduce human-caused grizzly mortality; reduce human-grizzly conflict by managing food attractants; and to maintain access to secure habitats”.

One of the larger threats to grizzly bear populations is human-caused mortality, with the four highest sources listed as poaching, accidental collisions with highway vehicles or trains, self-defence kills and hunters misidentifying grizzly bears as black bears.

Increasing public awareness of grizzly inhabited areas and what to do if you encounter one is likely the most influential way of reducing human caused mortality of grizzlies. Being careful of food attractants is also important, as bears that wander into built-up human areas put themselves and humans at risk. Bears that find food sources in human areas will usually become habituated and seek out further food sources in the same area, leading to necessary relocation or unfortunately destruction of the Bear if no other options are available (Wildsmart).

There are plans such as the Wildsmart program that removes both natural and unnatural food attractants from human settlement areas in order to provide safer areas for bears to find food.

Wright, William Henry (1909). The Grizzly Bear: The Narrative of a Hunter-Naturalist, Historical, Scientific and Adventurous.