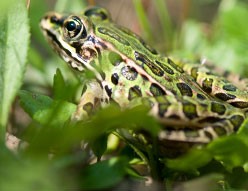 What are leopard frogs?

One of the largest frog species found in Alberta, the northern leopard frog (Lithobates pipiens) varies in size between 2 and 5 inches. They can be easily distinguished by their green or brown colouration and the numerous dark spots that give them their name (Russell & Bauer 2000). The call of the leopard frog is also quite distinctive, a low-pitched snore followed by clucking or grunting noises (AEP).

Where are leopard frogs found?

Until the late 1970s, leopard frogs were widely distributed across most of the province, but due to habitat fragmentation are now found mainly in isolated populations in the southern grass and wetlands of Alberta (Kendell 2007). The Alberta Environmental Protection agency has since listed the species as threatened, meaning they are at potential risk of becoming endangered.

What is being done to protect the leopard frog?

The first step was to conduct initial surveys of the entire province, which revealed around 20 populations of leopard frogs that had not yet been discovered. However, these surveys also showed that many of these sites were heavily impacted by human activity, mainly from agrarian development (ANLPRP 2005). The landowners of each of these instances were also surveyed and educated about the leopard frogs, in an effort to increase awareness and stewardship responsibilities. These issues were then also introduced to the public (via newspaper articles and tv segments), and conservation education was used to demonstrate the need for preservation of the species.

Over the course of the 5-year recovery plan, several re-introductions of leopard frog eggs were undertaken in historical leopard frog ranges. These initial re-introductions were closely monitored, and deemed a success after a majority of the eggs reached young-of-the-year stage in their development (followed by sub-adult and finally adult stage) (ANLPRP 2005). Based on these results, and data gathered from a similar project in Washington state, a facility for captive breeding and eventual release into the wild was constructed in Caroline, at the Raven Brood Trout Station in 2010.

Why is recovery of the leopard frog important?

Any species is an important contribution to the diversity and wellbeing of the ecosystem they inhabit. Northern leopard frogs feed on quite a large variety of prey, including small birds and even snakes. In this way, they can help reduce the numbers of animals that may prey on more susceptible species.

Amphibians are also generally very good bio-indicators, as they have a wide range of habitats and respond to change very quickly (COSEWIC). Responses to introduced predators/competing species and habitat changes (in the case of Alberta, the drainage of watersheds for agriculture and habitat fragmentation) can tell us exactly how the rest of the ecosystem may be effected.

As well as benefiting their own ecosystem, the leopard frog might also help us in ways we do not yet fully understand. Research from the University of Bath (UK) showed that synthetic versions of a molecule found in the egg cells of the northern leopard frog can be used to treat brain tumours, and perhaps other forms of cancer (Eurekalert 2007).

The northern leopard frog is currently under the supervision of the MULTISAR (Multiple Species at Risk program), which focuses on: surveying local populations; assessing the ecological status of the habitat; developing management recommendations and habitat enhancement projects; and monitoring the species’ response over time (AEP).

The release of information and subsequent education of the general public, as outlined in the Frog Recovery Plan, is focused primarily on the prevention of further habitat degradation and public assistance in finding new populations for us all to take care of.

Are you interested in learning how you can support AIWC care of injured and orphaned wildlife? Visit https://www.aiwc.ca/support-us/ for more information!

Eurekalert article on the research from University of Bath (https://www.eurekalert.org/pub_releases/2007-06/uob-fmc062607.php)

Russell, A.P., and Bauer, A.M. 2000. The Amphibians and Reptiles of Alberta. A field guide and primer of boreal herpetology, 2nd edition. University of Calgary Press and University of Alberta Press, Calgary and Edmonton, AB. 279 pp.