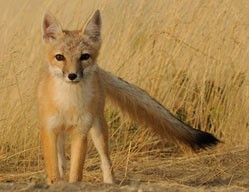 What are swift foxes?

As the name suggests, the swift fox (Vulpes velox) is a speedy little fox species once found in the prairies and foothills of the southern Alberta Rockies and in Saskatchewan and Manitoba. The species can be distinguished from other vulpine species by its small size (usually no bigger than a large housecat), which allows them to reach top speeds of up to 60 km/hr. Other defining traits include vertical cat-like eyes, black facial spots on the sides of their muzzles, and long, black-tipped bushy tails (AEP species profile; Alberta Swift Fox Recovery Plan 2006-2011).

Where are swift foxes found?

The swift fox was originally distributed in large populations across the Canadian Prairies, but declined due to poorly implemented trapping and predator control programs and an increase in agrarian development in the late 1800’s. This led the Committee on the Status of Endangered Species in Canada to classify the species as extirpated (locally extinct) in 1978. (ASFPR 2006-2011; COSEWIC).

Thankfully, a large project put together by the Smeetons of the Cochrane Ecological Institute (CEI) successfully re-introduced the species both in Canada and certain states in America, and this project is considered one of the most successful re-introductions of a small carnivore species worldwide (ASFPR 2006-2011; Weagle & Smeeton 1997).

How was the swift fox re-introduced to Alberta?

Initial populations of swift foxes to be used in breeding and captive-rearing programs were taken from populations across North America and brought to Alberta. Between 1983 and 1997, the CEI provided over 800 swift foxes, captive-bred and reared for eventual release into the wild.

The main goals of the associated research were to achieve the first successful re-introduction of an extirpated mammalian species; to develop non-intrusive monitoring methods for at-risk/endangered species, and to use this data to create a “blueprint” for other countries to follow regarding their own endangered species (Weagle & Smeeton 1997).

Among the most important aspects of any re-introduction project is to ensure that the captive-bred and captive-reared species are taught the skills necessary for them to survive in the wild, including hunting for wild prey. However, these skills alone are not enough for a successful re-introduction, as the methods of release and location are also extremely important (Weagle & Smeeton 1997; CEI 1995).

Why was the swift fox re-introduction important?

The loss of any species is always a tragedy, especially when it is due to preventable human impacts. Swift foxes are a unique part of the prairie ecosystem, as they are omnivorous and will feed on almost anything, including pest species such as mice or insects (AEP profile). They are also important bio-indicators (species that can tell us the health of the ecosystem they occupy) as swift foxes thrive best in large, unbroken expanses of short grass prairie with high prey numbers/variation. If the number of swift foxes dwindle, it can tell us that there may be greater ecosystem problems, such as pollutants or excessive prey reduction (Adamus 1996).  It is our responsibility to ensure that at-risk species are given the help they need to survive, not just for the species itself, but for the health of the larger ecosystem they contribute to.

At last estimate, there are less than 100 swift foxes living in southern Alberta, according to the AEP swift fox profile. They are currently protected under the federal Species at Risk Act (SARA), the Canadian National Parks and Alberta Wildlife Acts. It is prohibited to kill, harm, or harass the species. But these governmental acts are not enough to preserve them alone.

The Alberta swift fox re-introduction, while deemed a success, in that the species is no longer locally extinct, has had different results than another study (also done by the Smeetons and the CEI) with the Blackfeet Nation in Montana. The study in Montana had full control over release site selection and methodology, and provided post-program surveying and was far more effective, with a survival rate of over 75% after the first four years, compared to the 20% shown in the Canadian study (Weagle & Smeeton 1997).

It is therefore clear that a lot more research, surveying and monitoring of the captive-bred reintroductions is needed in Alberta. Post-release surveys and breeding programs are crucial in helping the species survive.

We lost this amazing species once. We can’t let it happen again.

Are you interesting in learning how to support injured and orphaned wildlife in Alberta? Visit https://www.aiwc.ca/support-us/ for more information.

Committee on the Status of Endangered Species in Canada (COSEWIC) (https://www.registrelep-sararegistry.gc.ca/species/speciesDetails_e.cfm?sid=140)