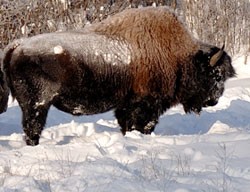 What are Wood Bison?

Albertan wood bison (Bison bison athabascae) are a subspecies of the American bison, distinguished by their larger size, darker and woollier fur, and less hair on the forelegs and beards (Bork et al 1991).

The boreal forest, specifically wetland-meadows and open savannah-like shrubland are the most important habitat types, but this can vary from season to season (AEP profile).

Where are Wood Bison found?

Historically, wood bison in Canada were found across the boreal forests of North America, including Alberta and the Northwest territories. In Alberta, they are found in the upper Northeast, primarily in the Wood Bison National Park and surrounding areas. Estimates taken between 2010 and 2015 showed ~9000 free-ranging wood bison left in Canada (Wood Bison recovery strategy 2016).

A carefully managed herd of wood bison reside in the area surrounding the Hay-Zama lake region, and they are kept separate from the free-roaming bison found in the northwest and national park (Alberta Wilderness Association)

What is being done to protect the Wood Bison?

Wood bison are currently listed as “At Risk” by the General Status of Alberta Wild Species report, but the protected herd of the Hay-Zama area are listed as endangered under the Wildlife Act. Wood bison that are free-roaming and found in the northwest Alberta protected area are illegal to hunt without a license. However, a proportion of free-roaming bison found in and around the national park carry strains of tuberculosis and brucellosis, which are introduced livestock diseases. Because of this, they receive no hunting protection, to prevent the spread of these diseases to the Hay-Zama population and domestic bison (AEP profile).

The main threats to the protected wood bison populations are the spread of livestock diseases, with the more general threats of increases in agrarian land, climate change and increased predation close behind.

The Recovery Strategy for Wood Bison in Canada (2016) outlines both short-term and long-term objectives for the protection and recovery of both the free-roaming and managed herds. Short-term management of the disease-free populations in the original Canadian range, establish self-sustaining populations and increase genetic diversity. The long-term objective is “to ensure the existence of at least five disease-free, genetically diverse, connected, self-sustaining free range local populations distributed across the natural range, with at least 1000 individuals per population” (Recovery Strategy 2016).

In terms of what the public can do, it is important that we focus on greater consultation with landowners (as many are opposed to the somewhat destructive nature of grazing herds) and increased awareness of where wood bison are protected and how our activities may impact them.