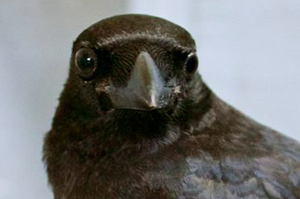 Imagine growing up in isolation. Not learning language from your parents or any other people. How well do you think you would be able to communicate with other people? Probably not very well, right? What about birds: are their vocalizations learned, or are they inherited? Development of “language” in birds is fairly complex. When raised in captivity without their natural parents to learn their proper vocalizations from, many bird species sing very simple fragments of their whole songs, suggesting that language in most birds is partly innate, or known, and partly learned from their parents (Boswell 2012). We also know that most adolescent songbirds require a “tutor” to learn their songs from (Vallentin et al 2016). There are some species of birds within the Suboscine family, however, that have an innate ability to know their species’ song (John 2017).

A recent study found that some songbirds are able to adapt their songs when they are surrounded by heavy traffic noises. They are able to sing at a different frequency than the noise of traffic. This may appear to be beneficial in their ability to still call out to a potential mate, however, their song sounds less natural, and a female may not respond as strongly (Gentry 2017). Songs that were altered to overcome traffic noises were often shorter in length and males producing shorter songs may have less success defending territory and therefore, a lower chance of successfully finding a mate (John 2017).

Other than songs and calls, some birds practice “mimicry”. Corvids (crows, magpies, bluejays, Steller’s Jay, to name a few) are examples of Canadian birds that mimic noises they hear in their environments. The sounds included in a bird’s vocalizations depends on the noises in its surrounding environment, meaning that birds of the same species may not mimic the same sound if they are not exposed to it (Mayntz 2017). The lyrebirds is an example of a bird that can nearly identically mimic sounds such as chainsaws, car alarms – you name it! However, these birds are exotic and do not live within in Canada. If we know that the purpose of calls are for actions of the birds making them, and songs are to attract mates, what is the purpose of mimicry? Mimicry can be used to impress a mate, to protect the nest or food source by producing the noise of a predator or threat calls of other birds, to defend a territory, for social acceptance within a group of other birds, or they could be accidentally learned in cases such as car alarms or non-natural mechanical sounds (Mayntz 2017).

It’s still winter in Canada, so the next time you’re out for a walk, pay attention to the calls the birds are making, since they are likely not preparing for mating season just yet. You’re likely to see chickadees and nuthatches in the treed areas around Calgary at this time of year. Ask yourself the following question to try and analyze the vocalizations the birds are making: Are both males and females making the same noises? Do they make calls when larger or predatory birds are nearby? Do they make calls when they have found a food source? Do they make calls to chase away other birds in their vicinity?

When the spring time comes and you find yourself out birding, or on a walk, pay closer attention to the birds that you see and the songs they are making. What are the birds doing? Is the bird a male, and is he only singing in one location, possibly his territory? Does another male bird, possibly a competitor, respond with the same song? Are any females gathering nearby? Does he stop singing when a female joins him?

Also, pay closer attention to crows and magpies. They tend to get a bad rap and people often view them in a bad light or ignore them altogether. They really are fascinating birds though, and can often be heard mimicking their surroundings, such as making the noise of a water drop. Have you heard them mimic anything else in their surrounding environment?

At AIWC, we strive to help any injured or orphaned wildlife in our care. If you would like to help us be able to care for any call-makers, song-makers, or mimickers, please visit our donation page here. Every bit helps ensure their return to the wild, where they can keep vocalizing!

Author’s note: I am by no means an expert ornithologist, nor am I an expert in bird vocalizations. I find the topic very interesting and wanted to share the information that I’ve found on the topic.