Feathers and Flight: An Interview with AIWC Veterinarian Dr. Jess 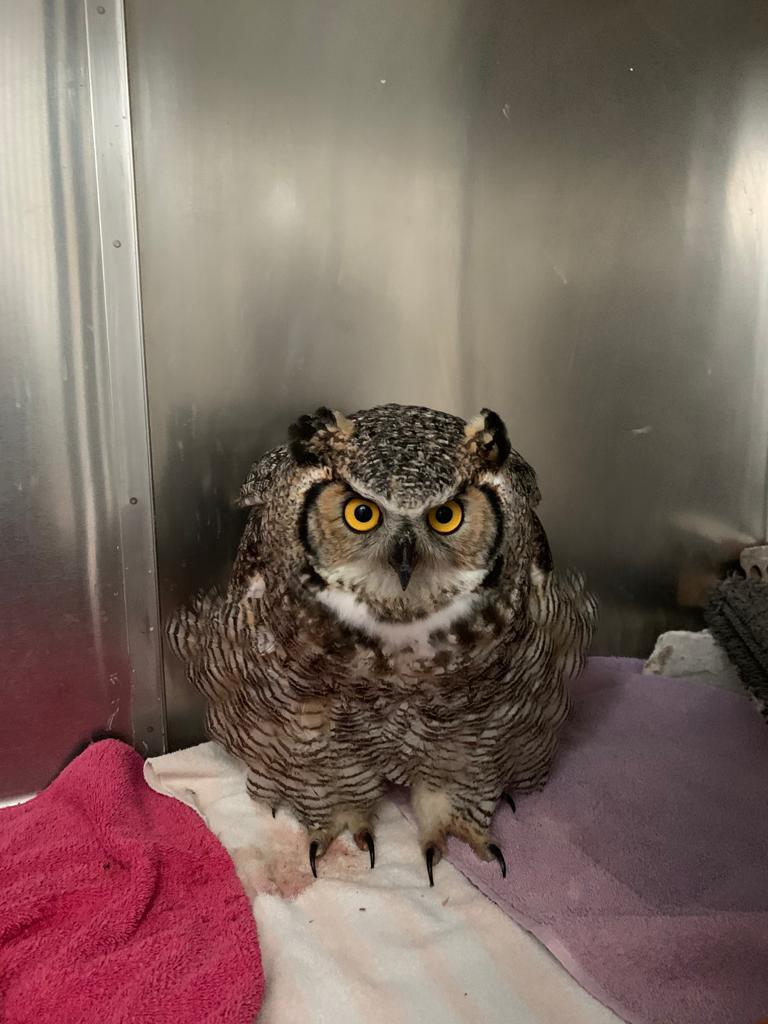 I met with AIWC’s veterinarian Dr. Jessica Khodadad (Dr. Jess) to discuss how and why feathers are important in maintaining birds’ majestic ability to fly. We discuss the aspects of feathers contributions to flight and how they are treated and cared for at AIWC.

Dr. Jess joined the AIWC team as the new veterinary intern through the National Wildlife Center. She graduated from Louisiana State University with her Veterinary degree in 2012. From there she worked in general practice for 5 years, at a small practice in central Florida, which is where she typically calls home.

She has always been fascinated with wildlife medicine and recently made the jump to achieve her dream of working with and helping wildlife. She has transferred to Calgary from Nova Scotia where she had spent the last 2 years working as a Veterinary intern at Hope for Wildlife.

Holly: What is it about feathers that contributes most to bird behavior? And how does that help them in their everyday lives?

Dr. Jess: “Well, feathers play a big part in birds in general, anything from flight to thermal regulating. They do play a vital role for birds. They have different types of feathers. They have their flight feathers, which will include their primary, secondaries and their tail feathers, they help control different aspects of the flight.”

“The primaries are primarily for their lifts along with their secondaries, their tails kind of act like little rudders to help them steer. So they all play a vital role in flight. The body feathers are more for thermoregulation. So especially in our colder climates, they help keep them warm during these colder months, and they can also help cool them off during the warmer months.”

“Other aspects they have will help with reproduction. So different colors in the feathers can act as a way to attract a mate. So they can also play a role in the reproduction as well.”

Holly: How long does it take to grow new feathers back?

Dr. Jess: “Well, it depends on the feather. If the feather is broken, they often have to drop that feather first and then grow it back. And in order to do that, they have to go through a molt cycle. Each molt cycle is different per bird. So for the great horned owls we have it can take anywhere from two to sometimes three years to fully molt their feathers because they go through it during certain seasons.”

“So greenhorns typically tend to molt more during the spring and summer time. And when they do that, they don’t molt all their feathers at once, they only molt certain feathers each time. So it can take a couple years for them to be able to molt an entire set of feathers.”

“If the feathers are completely pulled, and the follicle is empty, the feather will grow back far faster. The hard part is in our situation, if we have patients that come in with broken feathers, we don’t want to pull those feathers because you risk damaging that follicle and the follicles damage the feather so they won’t grow back properly or at all. So that’s why we don’t go in and often pluck feathers, the primary feathers or the secondary feathers.”

Holly: Can you tell us about stress bars in feathers?

Dr. Jess: “Stress bars are lines that develop in the feathers when their body’s going through a stressful period of time. So whether they’ve been ill, or their nutrition is maybe not the best or just something that puts them through physiological stress, those stress bars will actually show up on their feathers and indicate that at a certain period of time they were going through hardship. As I say, it could be a number of stressors. There’s not like one specific stressor that will cause it, it could be a number of things.”

Holly: How do we keep feathers in good condition at AIWC?

Dr. Jess: “We do several things. So for our raptors, especially to protect the tail, we have what are called tail guards. So it’s basically just a very thin piece of plastic that will actually tape to the tail to act as almost like a shield for the tail to try and prevent them from damaging it. Because a lot of times when they come in there down the ground, they’re not perching properly. If a bird is perching properly, ultimately, they shouldn’t be damaging their feathers. But a lot of the times when we get the sick and injured birds, they’re down on the ground, and that’s when they’re more likely to injure their feathers. So we put things like tail guards on them. We put them in larger enclosures, so they don’t bash their wings around.”[2]

“If damage does occur, there are some things we can do to kind of reverse that damage. If they bend their feathers a little bit, you can use boiling water in those spots to straighten it out. So there are different things we can do in different measures. A lot of it comes down to trying to prevent them from damaging their feathers in the first place. And like I said things like tail guards. Proper enclosure size will help with that.”

Holly: Is there a most common injury to feathers that you see?

Dr. Jess: “Sometimes we don’t know, it causes damage to the feathers themselves. A lot of times they come in, they have like an accompanying injury. They were hit by a car. And in that case, when they broke their wing, they ended up down on the ground and being down on the ground, damaged their feathers.”

“We have a couple owls here that I’ve had that presented for just injury to the feathers. One came in with all of his flight feathers completely sheared. So we think he may have had an encounter with some type of farming equipment.”

“Another came in one with all of her feathers seared, so we think they may have had an entanglement with methane flames. So we think that she may have flown by one of the factories and the flames coming from the factory, she may have basically seared her feathers, because they were all burned. But like a lot of times we don’t know the exact cause of it; we had a goose come in that had no injuries, but five or six super feathers were cut. Again, we don’t know why. But because she didn’t have any other injuries at the time of her presentation.”

Holly: Lastly, is there anything else that you would like the readers to know about feathers and flight?

Dr. Jess: “Each bird has a different type of feathers. So some have different adaptations to their feathers. Owl feathers are different from Hawk feathers.”

“So when we imp* the birds we have, ideally you want to get the exact same species to be able to imp. But you can imp different species, but if you do an owl, ideally, you’d want to try and imp owl feathers, because they have special adaptations to each of their feathers that allows them to maintain this specific type of flight that they need.”

“Owls need silent flight. Whereas hawks need more gliding, flight and speed. So when you do imp and you want to imp the same species, but if you can’t do that, you try to emphasize the closest species as possible.”

*Imping definition: Repairing a damaged feather in (the wing or tail) by attaching part of a new feather.

Feather injuries are certainly difficult to deal with, and we are so happy to have an expert like Dr. Jess at AIWC to help treat these patients. Thank you so much to Dr. Jess for taking the time to educate us on feathers and feather injuries at AIWC!

By Courtney Collins, AIWC Volunteer Did you know that bats are the only mammals that can fly? Not only are they incredible fliers, but they are also considerate neighbours and