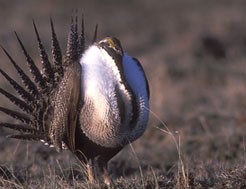 What are greater sage grouse?

Greater sage grouse (Centrocercus urophasiansus urophasianus) are a species of grouse (a member of the Galliformes order; related to chickens and turkeys) that gets its name from the sagebrush prairies they inhabit. The greater sage grouse is the largest grouse species in North America, and they are distinguished by their rounded wings, long pointed tails and a mixture of brownish-black plumage with white/gray patches on their abdomen (Schroeder et al 1999).

Where are they found?

In Canada, they are usually found in silver sagebrush (Artemesia cana) ranges, specifically in the mixed-grass regions of southern Alberta. While their historic range was once more extensive, the sage grouse population now resides in a 4,000 square kilometre area centred south and east of the hamlet of Manyberries (Alberta Sage Grouse Recovery Plan 2013) and the sage grouse is currently listed as endangered under the Alberta Wildlife Act.

The sage grouse’s habitat selection has been shown to be dependant on local factors such as availability of nesting and brood locations, and nearby leks (open, relatively flat areas that males use to display for prospective mates) (Petersen 1980).

What is being done to protect the greater sage grouse?

In 2005, a provincial recovery plan for the greater sage grouse in Alberta was drafted with the goals of both “enhancing and maintaining habitat for sage grouse to satisfy life-cycle requirements in support of a viable population within its historic range” and to “achieve recovery of the sage grouse population to a level that provides for sustainable recreational viewing and hunting”.

However, this plan was reviewed in 2013, as the population was still declining. The previous goals were thus considered to be long term targets, and new short-term goals were implemented in the recovery plan of 2013 to complete these goals, including the restoration of sage grouse habitat, through increased land use standards and stewardship; reclamation of potential land areas; and predator management. These goals seek to achieve a positive trend in sage grouse active leks by 2018 (Alberta Sage Grouse Recovery Plan 2013).

According to the Alberta Sage Grouse Recovery Plan (2013), the greatest limiting factor in increasing the sage grouse populations is the reduction in suitable sagebrush habitats. Human activity and land development are the biggest contributor to habitat change so reducing these impacts or perhaps ensuring that they are adequately controlled or legislated may do a great deal in helping to preserve the populations already present in fragmented habitats.

As is usually the case with endangered or at-risk species, the best way the general public can help is by raising awareness. Landowners are also encouraged to care for potential habitat usage and stewardship programs, with help from governmental and conservation organisations.