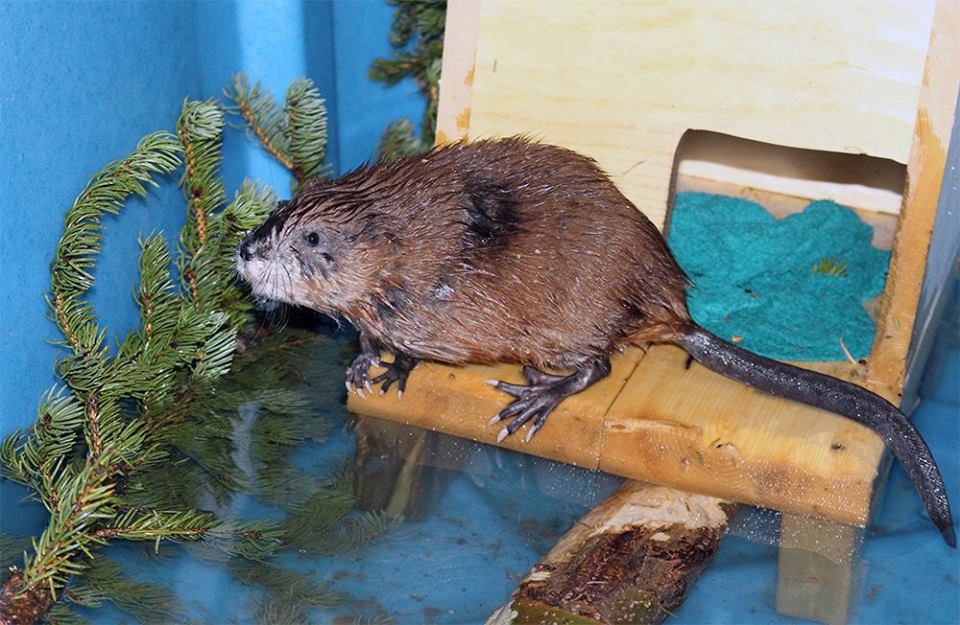 Adults can only weigh up to 1.5 kilograms, so these little pond-dwellers can be hard to spot. However; muskrats are still the largest members of the rat and mouse family in North America!

Muskrats look a little bit like beavers, don’t they? With their scruffy brown furry bodies and aquatic lifestyles, it could be easy to mix them up!

Physically though, muskrats are quite different. First of all, they’re much smaller, and secondly their tails are narrow and flat. In fact they almost look like rat tails.

Muskrats have partially webbed hind feet that they use to help them swim, and they use their front feet like little hands to grab objects.

Using mud, pond weeds, cattail and bulrushes, muskrats build their homes near the water. They tend to live in family groups and can be defensive about their portion of the pond. Each muskrat family’s section has a house, feeding area and canals through cattails and pond vegetation.

With winter on its way, muskrats are busy putting together domes made from frozen vegetation to cover holes in the ice. According to Alberta Environment and Parks’ website, muskrats keep the domes open throughout the winter by continually chewing away the ice and pulling up underwater vegetation to build an insulated dome. These miniature lodges are used as resting places during underwater forays and as feeding stations.

Muskrats like to eat meat and greens. They enjoy pond weeds and vegetation, but also like feasting on mussels, frogs, salamanders and small fish.

Muskrats are feisty little critters! Especially during breeding season when they are often seen fighting within their own families.

Young muskrats are now venturing out on their own and could struggle to find homes and territories since they‘re being claimed by older muskrats, and since preparations for winter started last month. It’s possible that you might see some younger muskrats making their way into urban and residential areas looking for winter homes.
If you see a muskrat far from water or venturing into a dangerous place, give AIWC a call
at 403-946-2361. AIWC is open every day from 9 a.m. to 5 p.m.