Nesting Mallards: What Happens and How Can We Help? 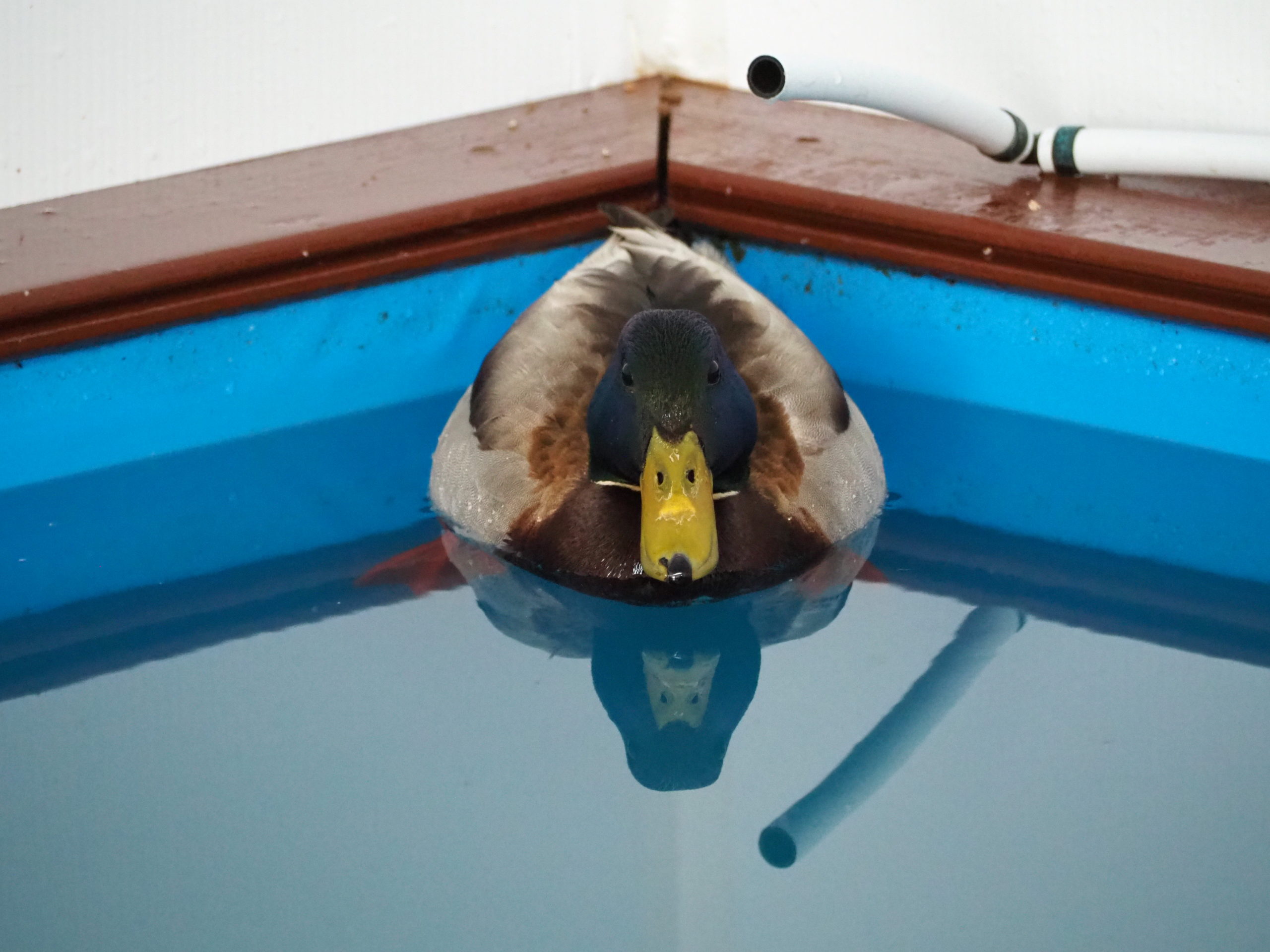 The shiny blue wing speculum and bright green head of breeding males make mallards one of the most recognizable duck species in Alberta. From late March until autumn, they are usually found in any open water, including ditches, dugouts and city fountains. Some even live-year round in city ponds [1].

When it’s time to nest, mated pairs return to the area where the female (aka hen) was born [2] and build the nest up to 1.7 kilometres from water. Ground nests are most common, but they also choose trees, nest boxes, the tops of boulders and buildings and even floating nests. Grass and underbrush provide both building material and shelter [1].

The female incubates the eggs and cares for the offspring alone. She lays one grey-green egg daily but won’t stay and sit on the nest until a clutch of eight to twelve has been laid. Some hens have been known to lay eighteen eggs, but any more usually means that two hens are using the same nest. When she’s away, she covers the eggs with nesting material and down. While this provides some camouflage, nests can still be preyed on or accidentally disturbed, or the hen may decide that the location is no longer safe. When this happens, she’ll move on and lay a new clutch somewhere else [1].

Incubation begins when the last egg is laid and lasts about twenty-eight days [1]. Once the ducklings hatch, they abandon the nest and follow their mother to water, a journey that can pass through backyards, parks, fields, roads and fences [2].

Occasionally, a breeding pair will show interest in a backyard pool or fishpond. To encourage them to nest somewhere else, removing potential food sources like bird feeders is usually all that’s needed. Where local bylaws allow them, streamers, scarecrows, airhorns, sirens and propane bangers provide a stronger incentive to leave. However, this should only be a last resort. Mallards will nest and leave the area within a month, so you won’t have long to wait! However, if the mother or ducklings appear to be injured, you will need to call AIWC or another rehabilitation organization [3].

It’s unlawful to tamper with migratory bird nests or eggs, so if one is found in a dangerous location, call AIWC or your local Fish and Wildlife office instead of attempting to move it. Keep in mind that eggs cannot be rehabilitated, so the nest should be left alone if it appears to be abandoned. The hen has most likely re-nested and the eggs will provide food for other animals [4]. Surprisingly, the top of a 2-3 story building is not a bad nesting location, as ducklings can jump from significant heights without being harmed and have no need to return to the nest after hatching [4].

When (and who) to call for help

Hens are usually very diligent about bringing their entire clutch to water safely, and it’s uncommon to find ducklings alone. If you do, immediately check for nearby adults. The hen could have left her young after perceiving a threat such as a well-meaning human. She may be nearby, faking an injury, flapping her wings and squawking to distract a potential predator, but given enough space, she will reclaim her offspring. Don’t worry if you see a female mallard behaving oddly – she could be protecting her ducklings, and not actually injured [2].

Duck-related concerns on busy roads and highways should be directly reported to Fish and Wildlife, or to non-emergency services if you are in a city. Only on quiet streets, private driveways and pedestrian paths is it suitable to escort ducks to water [3] and to cover storm drains with plywood to prevent falls as they are walking past. If you find ducklings in a drain or trapped by a curb, it’s fine to gently lift them out. Contrary to popular myth, most birds will still recognize their babies even if they’ve been handled by humans [4]. If water isn’t accessible, Ducks Unlimited Canada (DUC) suggests that you “put young in an open box and carry on top of your head in view of the mother to the nearest water source”. However, if no dangers are present, ducklings with their mother are best left alone. Don’t offer food, even if they seem to want it [3].

If there are more than four ducklings without an adult, the best thing to do is to put them in a shallow box to prevent them from leaving the area. If a hen doesn’t reclaim them within 45 minutes, call AIWC or bring them to the nearest emergency veterinary clinic [4]. Not only is it illegal to keep them, but they have a better chance of survival with specialized care [3]. If four or fewer ducklings are confirmed to be without a parent, skip the wait and immediately contact AIWC [3]!

Mallard ducklings grow up fast and are independent by late summer. In the fall, they’ll join other ducks and migrate south, where they’ll seek a mate and prepare to start a new generation [2].

3 thoughts on “Nesting Mallards: What Happens and How Can We Help?”