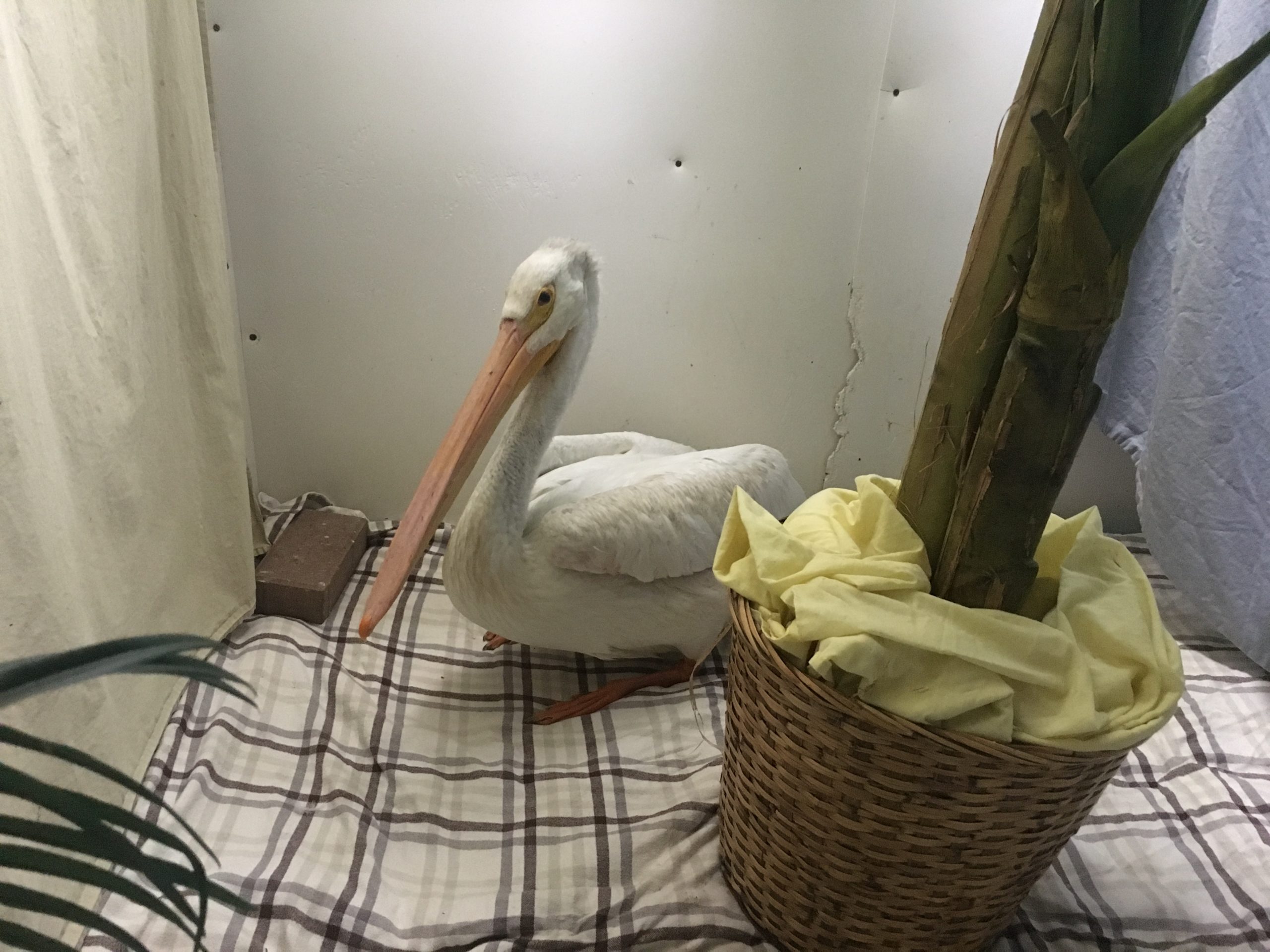 In light of AIWC’s recent pelican patient, it became clear to me that many people don’t realize we have pelicans in Alberta. That’s totally ok, because not everyone lives and breathes wildlife (AIWC staff and volunteers, I’m talking about you!)  This blog is going to give you information about pelicans, hopefully more than you knew before reading it.

Pelicans belong to the Pelecanidae family, and there are a total of eight different pelican species throughout the world. These water-loving birds can be found inland and along coastlines. The different species range in colour from white to grey to brown to black.

The species found in Alberta is the American white pelican (Pelecanus erythrorhynchos). Other than size difference, female and male American white pelicans have the same appearance – orange bills and legs, white feathers on the body, and black posterior feathers at the tip of the wings that can be seen in their silhouette while flying, but are difficult to see when on water or ground.

Mostly everyone knows what a pelican is because of their unique bill. Their bills are very large, with a flat top and a large throat sac on the bottom. Pelicans do not store food in their beaks!

During breeding season, the bill, iris, bare skin around the eyes, and the feet become a more brilliant orange to impress the mate. An interesting fact about the bill of this particular pelican species is the upper bill grows a laterally flattened 3 inch horn (otherwise known as a caruncle) about 1/3 the length of the bill from the tip of the bill. The horn is the shape of half a circle, both males and females grow them, and it is believed to be sexual ornamentation to aid in helping get the best mate. After mating season is over, the horn is shed and the orange colours become increasingly dull. No other species of pelican grows this horn!

Other pelican species dive to catch fish, but these pelicans catch food from the surface of water while swimming. Pelicans eat more than 4 lbs of fish per day. That’s the equivalent of 20-35% of their body weight (the average weight of a pelican ranges between 11 to 20 lbs).

These birds are believed to be social birds, and nest on river islands in colonies with several hundred pairs – often up to 5,000 birds. Like several other bird species, these pelicans mate for life (their lifespan in the wild is over 17 years!).

American white pelicans are found in Alberta during their mating season, which usually ranges from March or April until September or October. They migrate south to the Pacific and the Gulf of Mexico Coasts, and tend to live in estuaries, lakes, and rivers. This species tend to avoid the open seashore and open ocean, and fly over land during their migration.

The American white pelican is globally listed as a species of least concern. However, conflicts with humans still occur. The most common anthropogenic issues with American white pelicans include, but are not limited to, habitat loss, fishing gear incidents, boating disturbances, and poaching,