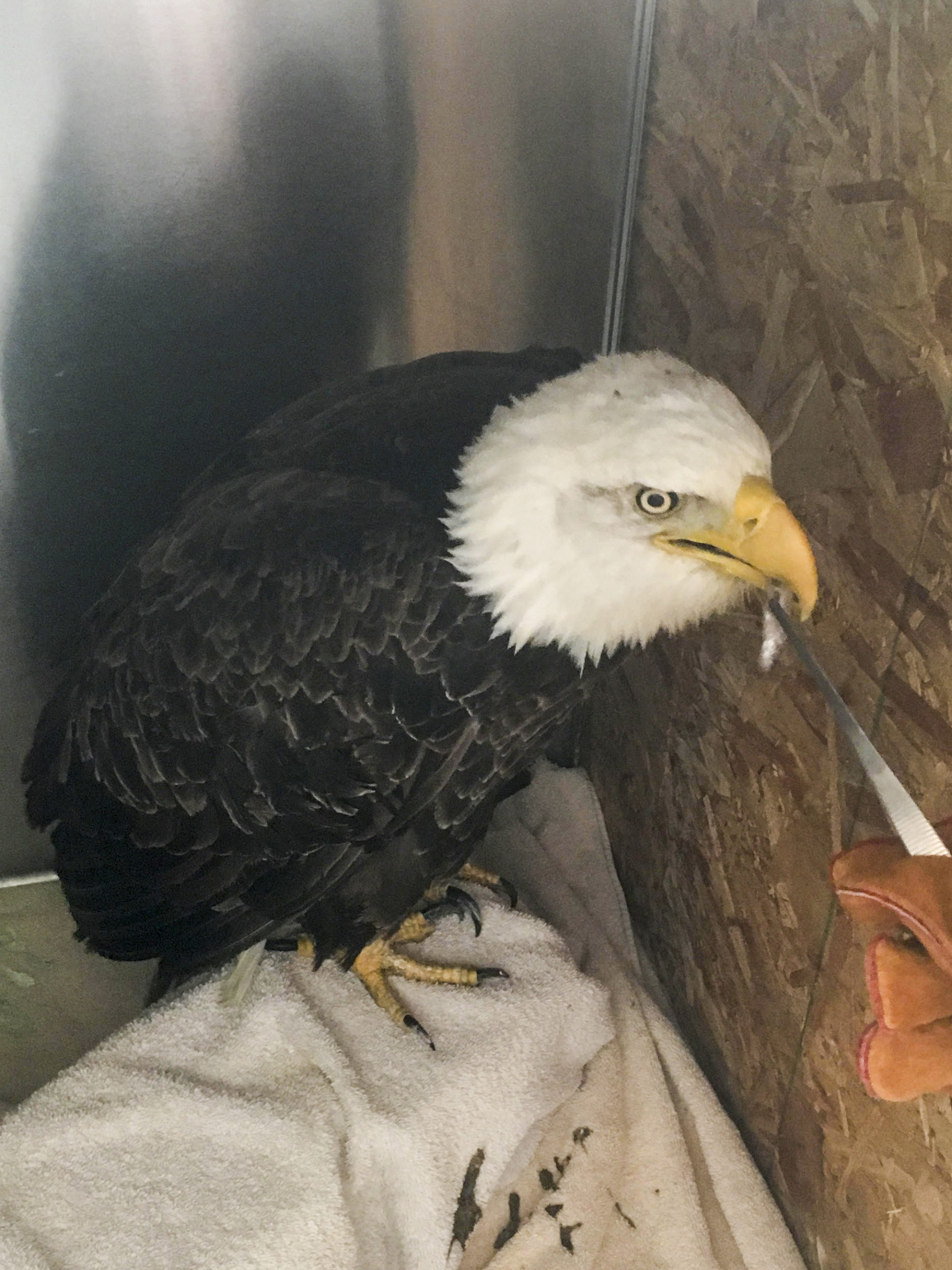 This blog post is inspired by a recent bald eagle patient who was admitted to AIWC due to lead poisoning. I want to explore the different reasons behind how and why wildlife can become poisoned.

Some birds of prey die from secondary poisoning after feeding on waterfowl or deer containing lead shot as a result of ingestion or hunting (Government of Canada 2013, FWS 2015). Although lead bullets are banned across Canada, they are still widely used today (Gladue 1999, Government of Canada 2013, Williams 2017). Many of the lead shots that are fired don’t actually hit the intended target, and end up in the surrounding environment (Gladue 1999).

What happens to the lead once it ends up in the soil or a waterbody? It can accumulate in the tissues of living organisms and act as a poison to some species.

Bioaccumulation (also known as bioconcentration) is the effect whereby some metals and chemicals occur in higher concentrations in living organisms than they do in the surrounding environment, such as the water or soil (Freedman 2007).

Biomagnification (also known as food-web magnification) is the effect whereby top predators or species higher up in the food chain have higher concentrations of these metals and chemicals in their tissue (Freedman 2007).

The most classic example that exists of bioaccumulation is that of DDT – Dichlorodiphenyltrichloroethane (what a mouth full!). DDT was a widely-used pesticide in the past and has roots during World War II. It was highly effective at eliminating mosquito populations and therefore preventing soldiers and civilians from contracting diseases that the mosquitoes carried. Eventually, this pesticide was used globally and we began to see detrimental effects on birds higher up in the food chain, such as birds of prey. As the DDT accumulated in the soil and water it began to bioaccumulate in the plants, insects, rodents, fish, and other animals lower down in the food chain. Birds of prey ate these organisms and the effect of bioaccumulation continued. DDT affected the reproduction of many birds of prey, caused egg shells to be soft and kill the offspring inside or caused eggs not to hatch altogether.

Another example of bioaccumulation is with the common loon and methylmercury. This bird is a top predator in many lakes across Canada and can contain concentrations of methylmercury so high that it impedes their reproduction (Freedman 2007).

There are also some other factors that come into play when an animal is exposed to a poison. The toxicity of a poison may impact organisms differently due to the exposure or dose of the poison, which can further impact an organism due to the concentration of the poison and the amount of time the animal is exposed (Freedman 2007). The vulnerability or tolerance of the organism to a specific poison will also impact the toxicity of a poison (Freedman 2007). Bald eagles are particularly susceptible to lead poisoning and it only takes a small amount of lead to result in severe poisoning (Williams 2017).

There are several ways that you can help prevent poisoning of wildlife, and this blog wants to stress the importance of:

Lead can also be found in some fishing lures, sinkers and jigs and is a major cause of death among common loons in eastern Canada and the US (Government of Canada 2013). This can be prevented by ensuring non-lead fishing lures are used.

Animals can show a variety of symptoms associated with poisoning, including but not limited to weakness, inability to walk, stand or fly (Williams 2017). If you think you have spotted a wild animal that has been poisoned, please call us at 403-946-2361.

If you would like to help future patients who may need special care due to poisoning, please support us (https://www.aiwc.ca/support-us/) or contact us to see how you can help.

Another great way to help the wildlife is to educate children; we offer education programs to do just this! Head on over to our Wildlife Education Programs page (https://www.aiwc.ca/education/topics/) for more information.

1 thought on “Poisons and Predators”