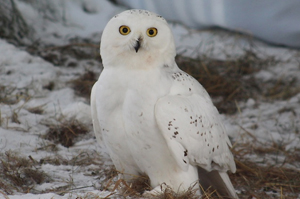 About two or three years ago, I spotted the largest number of snowy owls I had ever seen in southern Alberta. I haven’t seen as many this winter season, and began to wonder if there was a reason for this. Maybe I have been spending less time out of the city this winter, I’m getting rusty at spotting them or maybe there is some other driving force that influences the snowy owl population size.

The way the snowshoe hare-lynx population cycle works is like this:

The cycle continues like this, with booms and busts for each species (Northwest Territories Environment and Natural Resources). Of course, there are more factors that can come into play, but that is a simplified version.

With the snowy owl, there has been speculation and several recent studies on the relation between the snowy owl and lemming populations (Fears 2014; Smith 2014). Lemmings are small rodents that are related to voles and inhabit northern Canada. They reproduce quickly and reach peak population sizes every three to five years (Canadian Encyclopedia 2017).

In the summer of 2013, there was an abundance of lemmings in northern Canada. This resulted in high reproductive success rates for snowy owls and an abundance of snowy owl fledglings successfully leaving their nests. Because there were so many new owls the following winter season during their migration south, many of the young owls distributed themselves further south and closer together than normal (Fears 2014; Smith 2014). This is what lead to me seeing more snowy owls than ever before!

Lemming population booms have virtually stopped in Greenland and the Scandinavian Arctic (Fears 2014). Global warming is causing decreases in snow cover and changes in snow texture (IPCC 2014), which is believed to be causing the change in lemming population booms. Arctic Canada has also seen a trend of decreasing snow cover and increases in permafrost and surface temperatures (IPCC 2014). As trends continue in this direction, they will not favor the lemming and I speculate that we can expect to see population booms of the snowy owl become fewer and farther between.

AIWC usually receives a few snowy owls each year. Head over to our Adopt an Animal page (https://www.aiwc.ca/support-us/adopt-an-animal/) or call us at 403-946-2361 to help support a large raptor today!