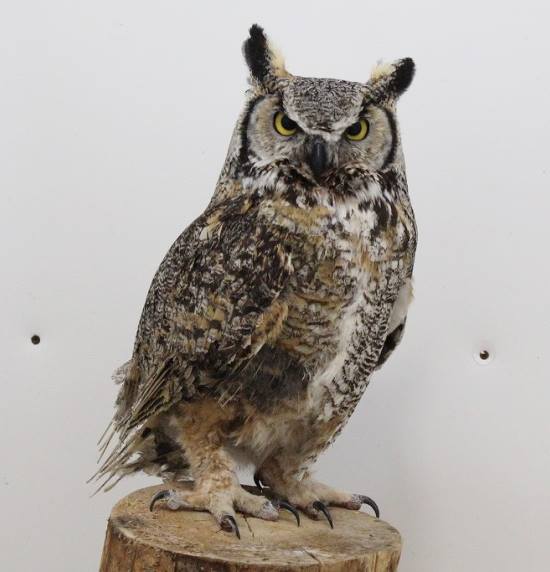 Did you know that the Great Horned Owl is one of the most common owls in North America?

The Great Horned Owl is aptly named due to the tufts of feathers on the top of the head that appear to be horns or ears. In fact, the ears of this owl (and some other owls) are located on the side of the head and are asymmetric, meaning one is higher up than the other (Lewis 2016; Cornell University 2015). Ear asymmetry typically occurs with nocturnal owls because they rely on their hearing for hunting (Lewis 2016).

Another physiological adaptation that allows owls to hunt better at night is their unique disc-shaped face which helps funnel sound to their ears (IPT 2017; Lewis 2016; Cornell University 2015; FRGZEV 2006).

Although this species relies heavily on their hearing for hunting at night, the eyes of this predator are also adapted to be able to see in low light conditions which further aids their hunting abilities (IPT 2017; Cornell University 2015; FRGZEV 2006). The large size of the owl’s eyes allow them to absorb more light over the larger surface area (IPT 2017). They also contain a tapetum lucidum, which is an adaptation in many animals species that allows them to see better at night time and is the structure that causes eyes of some animals to “glow” at night when light is shined on them (IPT 2017).

The Great Horned Owl is one of the earlier nesting species in southern Alberta and often breed as early as late January or February. This species lays 2 to 3 eggs and both parents take turns incubating the eggs. The incubation period is 30 to 35 days, which means we can see hatchlings in our area as early as late February or early March. If one of the hatchlings falls out of the nest early, the parents will still care for him or her by feeding them on the ground (Cornell University 2015; FRGZEV 2006).

If you happen to see a young owl that has fallen out of it’s nest, make sure you observe to see if there are any parents nearby. If you think the nestling has been abandoned, please call AIWC for advice (403-946-2361).

AIWC currently has a Great Horned Owl patient who fell victim to a methane flare. This owl will remain with AIWC until she completes a full feather molt and can once again fly. If you would like to help with the care of this owl, please visit our Adopt an Animal page (https://www.aiwc.ca/support-us/adopt-an-animal/).

6 thoughts on “The Great Horned Owl”