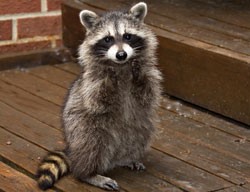 As today is Halloween, it seems appropriate to profile an animal that is typically associated with all things sneaky and dark: the raccoon!

Many southern Alberta residents may never have seen a raccoon, as these creatures are nocturnal, so are not often spotted during the day. It is a commonly held belief that raccoons cannot be found in the Calgary area; however, they actually have been living in and around Calgary for approximately 25 years (CBC News).

Raccoons are famous for their black “masked” face and striped tail, and measure approximately 60-95 centimetres from nose to tail, and weight six to eight kilograms, with females being approximately 25% smaller than males (Wild Safe BC).

These masked creatures are omnivores and will eat just about anything they can get their hands on. They do, however, have preference for nuts, insects and berries. A raccoon in the wild has a relatively short life span. While a raccoon in captivity may live in excess of 15 years, a wild raccoon has an average life expectancy of three to five years, due to high mortality rate amongst their young (Wild Safe BC).

Raccoons in many parts of Canada have a “winter denning period”, or a period of inactivity that enables them to survive the harsh Canadian winter, when food is scarce. Do not be alarmed if you see a raccoon roaming around during the winter though! These clever creatures are adept at finding food sources and may not have a winter denning period in urban centres or warmer regions, where food is regularly available (Wild Safe BC).

While racoons are typically shy creatures, it’s not uncommon for them to become comfortable around humans or pets. These masked bandits are experts at stealing food from our garbage cans, and can quickly learn to associate humans with good food sources. As they become more habituated to humans, conflicts can occur. You can help discourage raccoons from moving into urban areas by ensuring your garbage cans are closed and secured, harvesting fruit trees and berry bushes as soon as the fruit is ripe, and by leaving pet food inside your home where raccoons cannot access it. If you are having problems with raccoons frequenting your property, installing motion-activated lights may be a sufficient deterrent (Wild Safe BC).

If you are fortunate enough to see a raccoon in the wild, keep your distance. Though they look cute and cuddly, like all wild animals, they become aggressive if they feel threatened, and can inflict serious harm.

CBC News. “Raccoons spotted in and around Calgary”. Available at: https://www.cbc.ca/news/canada/calgary/raccoons-spotted-in-and-around-calgary-1.2789177. Accessed October 29, 2017.