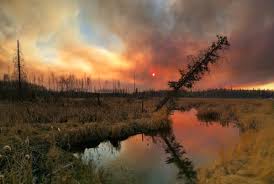 Last year in Alberta, on May 1st, 2016, the largest ever wildfire evacuation took place with thousands of residents from Fort McMurray fleeing south along highway 63 towards Edmonton and Calgary. Many people had no choice but to abandon everything, as the flames quickly grew out of control. Many more people wondered if they too would have to evacuate as the fire eventually crossed the border into Saskatchewan. But, luckily for them the fire subsided and after two long months, on July 5th, 2016 the flames were finally declared under control.

The fire destroyed not only people’s houses, but also the homes of all the wildlife that used to live in the area. For the animals that were lucky enough to survive the fire, thick clouds of smoke forced them to abandon their habitat. It will take many years for the roughly 500,000 burned hectares to be fully populated again. This is because in order for animals to return, all the vegetation that was destroyed has to regrow through a process known as secondary succession.

During this time the plants are competing to see who can grow the fastest and get the closest to the sun. By hoarding the sunlight to itself, the conifer species—who can first grow tall enough to provide a canopy—will be the one that will dominate the forest. This takes quite some time with ten percent canopy coverage from five-meter-tall trees taking anywhere from five to ten years to grow. The boreal plains ecozone has particularly rich soil though, so this process could occur much faster.

Maintaining the fire killed trees (snags) is an important way we can help speed up the recovery of the forest. The reason being, that woodpeckers create cavities for nesting in snags, that are used by a variety of other birds and small mammals who can then go on to disperse and germinate seeds. Eventually, these seeds will create the trees, branches and foliage that the over four hundred species of birds in Alberta rely upon for creating nests and roosting. Snags with cavities only stay erect for a couple of years however, and it is important that we maintain them for as long as possible.

We also need to remain patient and to simply allow mother nature to take her course. After a period of twenty years or so, we will again be able to see the forest for the trees. We can also take comfort in the fact that all the dried up organic matter on the forest floor will be gone, and in its place will be a moist layer of vegetation that will likely prevent another fire from occurring. Until then you can be happy for all the bears, ungulates and woodpeckers that are likely to benefit in the short term.

For more information on Alberta’s wildlife, book an education program with our knowledgeable staff and volunteers. To support AIWC’s ongoing care of wildlife in Alberta consider adopting an animal, donating items from our wish list, purchasing your copy of Scared Skunk or volunteering.

By Holly Hastings, AIWC Volunteer What is light pollution?  It is classified as the lightening of the night sky by artificial light such as streetlamps and store signs.  Why is