A Visit to Frank Lake

So, you want to go birding? Today’s blog is going to be all about a great location just outside of Calgary, that you can visit to enjoy the outdoors and see several bird species, and if you’re lucky, some mammals as well.

Let us introduce you to Frank Lake! Frank Lake is only about 45 minutes south of Calgary. To get to the lake, take Highway 2 southbound for about 50 km, turn off on the eastbound exit to Highway 23, and head east for another 5 km. The turn-off for the lake will be on the south side of the road and will lead you to the parking lot. 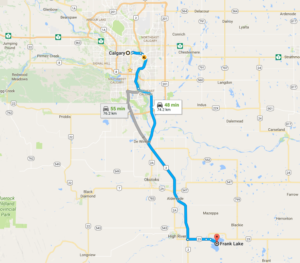 (Image courtesy of Google Maps 2017a)

Frank Lake is considered to be a wetland complex and boasts thick vegetation along the shorelines that provides excellent habitat for waterfowl, marsh birds, shorebirds, and other wildlife. The wetland complex consists of three basins that total 3,100 acres of wetland, and an additional 1,700 acres of surrounding managed upland (Ducks Unlimited 2017). The surrounding landscape is mostly agriculture and pasture land. 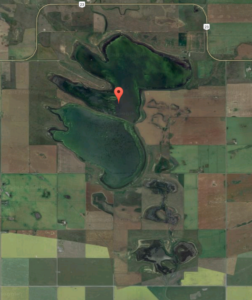 (Photo courtesy of Google Maps 2017b)

This location attracts several animal species: a total of 194 bird species and 16 mammal species have been recorded here, as well as 190 plant species (Ducks Unlimited 2017).

Frank Lake is currently a managed and monitored wetland and is considered one of the most important wetlands in southern Alberta for breeding water birds (Bird Studies Canada 2017). Prior to management of Frank Lake, the area had seen several years of complete dryness, and on the complete opposite end, had also seen several years of flooding. By managing the wetland complex that is Frank Lake as a permanent waterbody, wildlife habitat is maintained. Ducks Unlimited worked with industry, municipal, provincial and federal governments in 1988 to determine a long-term plan to maintain and protect water levels of the lake from drought and flooding (Ducks Unlimited 2017). Fast forward almost 30 years and you will see the thriving wetland that it is today!

Furthermore, many artificial structures such as nest boxes, nest platforms, and rock islands have been placed throughout the wetland to enhance the habitat for wildlife that nest and live here (Bird Studies Canada 2017).

Pictured here are a yellow-headed black bird, a ruddy duck, an eared grebe, an American avocet, and a muskrat. 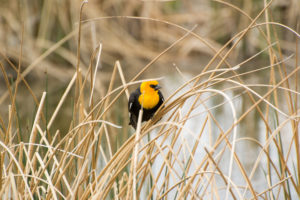 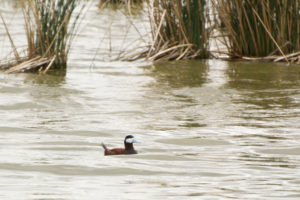 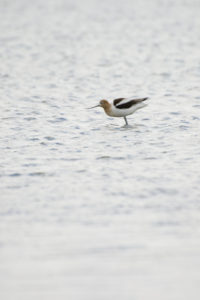 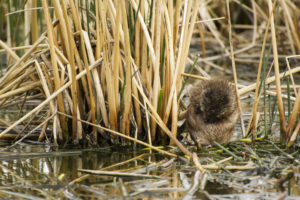 Before you venture out to Frank Lake, we encourage you to:

–     First, check the weather and wear appropriate clothing; and,

This handy tool allows you to see what bird species have been reported at the lake and during what times of the year!

As stewards of wildlife we ask you to be respectful while visiting Frank Lake (or any natural area) and to stay on the designated pathways, to not purposefully disrupt any wildlife that may be present, and to make sure you leave no garbage behind.

As always, if you see any wildlife in distress, please don’t hesitate to call us at 403-946-2361 to seek advice or assistance in the matter. Stay safe and have fun!

For specific directions on how to get to Frank Lake, follow this link:

7 responses to “A Visit to Frank Lake”