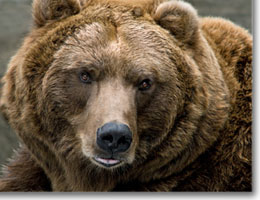 Imagine the tallest human being in history, Robert Pershing Wadlow who was 2.47 meters tall. Now imagine a grizzly bear standing on his hind legs. Who do you think is taller? You may be surprised to find out that these behemoth bears can be over three meters tall when standing. Now how much would you suppose a 3-meter-tall grizzly weighs? What if I said over 325 kilograms! Does that sound crazy? Also, do not go thinking that you can outrun them either, since grizzlies can reach speeds of up to fifty-five kilometers per hour, and are excellent swimmers too!

Roughly, 50,000 years ago these magnificent beasts traversed the Bering land bridge making the journey from Eurasia to North America. Due to their travel itch, these bears have become the most widespread species in the entire world; however, we did not know this for some period. In fact, in the 19th century people thought there were 86 different species of grizzly! It was not until 1953 that we discovered that despite being geographically isolated and having different coat colours and sizes, that these were all in fact one species known as the brown bear, Ursus arctos. One particular subspecies the grizzly, Ursus arctos horribilis, is a little bit more aggressive then the rest. You can tell grizzlies apart from the tamer black bear – which is sometimes brown especially in open, sunny areas – by the grizzly’s dished face, and by their large muscular shoulder hump that is used for digging dens. Grizzly bear tracks are also different from that of black bears due to their longer claws.

Grizzlies may be more aggressive compared with other brown bear subspecies due to their history on the prairies. With a lack of shelter, grizzlies became accustomed to standing their ground, and naturally had to defend themselves instead of hiding.

The population in Canada has dwindled down to 20,000, being mostly located in British Columbia, but also throughout the Alberta Rockies, Yukon, Northwest Territories, and Nunavut. Historically, in Alberta, grizzly population levels were at 6,000-9,000 bears. In 2002, their numbers dropped to around 1,000, and in 2006 there was a hunting ban, but it was not until their population fell to 691 in 2010 that they became listed as a threatened species in Alberta. Presently in Alberta, you will find them in the Banff and Jasper National parks, as well as on the foothills along the mountains, and in the northwest boreal forest.

The biggest hurdle towards achieving a sustainable grizzly population is habitat fragmentation. When grizzly populations become isolated and fragmented they become susceptible to local extinction due to inbreeding, disease, fire, and human induced mortality. Many of these sub populations of grizzly are going extinct and one of the main causes of fragmentation are roads. Some reasons roads cause bear deaths are because of vehicle collisions and poaching. Also, female grizzlies are reluctant to cross roads, which reduces their ability to breed and to gather resources for winter. Typical female ranges are 150 – 3,000 km2 and so a reduced range may prevent her from gathering enough fat before winter. If she does manage to survive, less weight means that fewer cubs will be born.

So you may be asking yourself now, “What can I do to protect this iconic species?” Well for starters, always make sure to properly dispose of your trash and waste on campgrounds. Make sure to scare off grizzlies if you see one by making lots of noise. Try to avoid encounters as much as possible, by avoiding smaller trails, industrial access roads, and areas with lots of berries in the fall. Make sure you report bear sightings to your local authority to prevent conflicts with humans and watch out for bears on the road!

For more information on Alberta’s wildlife, book an education program with our knowledgeable staff and volunteers. To support AIWC’s ongoing care of wildlife in Alberta, consider adopting an animal, donating to items from our wish list, purchasing your copy of Scared Skunk or volunteering at the center.

Alberta Wilderness Association. The grizzly bear is one of the most glamorous and prestigious wildlife species in Alberta. Available at: https://albertawilderness.ca/issues/wildlife/grizzly-bear/